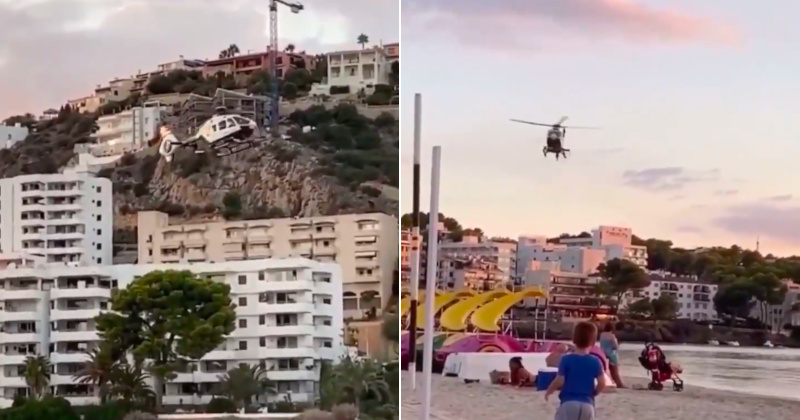 Spain’s Civil Guard has confirmed that it will now deploy helicopters and other vehicles to remind tourists of growing coronavirus restrictions, amid concerns online that the government is becoming increasingly authoritarian.

Footage has been shared widely online showing Spanish police barking instructions at beach goers in Mallorca from a helicopter.

Some commentators described the video as “creepy,” as others decried the huge waste of police resources to harass a practically empty beach while the streets of Palma are filled with people “not wearing masks, smoking, not distancing while the police do nothing.”

Others still shared footage of a woman being arrested by a group of police in Madrid for not wearing a mask as yet further evidence of the country’s slip towards increased authoritarianism.

RT contributor Neil Clark suggested that Spain had become “even more authoritarian than it was under Franco,” in reference to Francisco Franco who ruled Spain as a dictator from 1939 to 1975.

“The broadcast of messages using megaphones from vehicles and helicopters at beaches and parks is being carried out on a daily basis,” a Civil Guard spokesman said, amid a spike in Covid-19 cases since an air corridor was opened between UK and the Balearic Islands without the need to quarantine.

The popular UK tourist destination is already subject to increased restrictions to limit the spread of the coronavirus: beaches are closed between 9pm and 7am, parks are also being closed overnight to prevent partygoers from congregating there after nightclubs and bars close.

The resort of San Antonio in Ibiza and Deia in Majorca are among 15 municipalities which could soon be subject to strict nocturnal curfews and a five-person social gathering limit. An announcement from local authorities with more details is expected Monday.

Reports online suggest authorities in the Balearic Islands are preparing to impose a night time curfew in the areas hardest-hit by the recent uptick in cases.