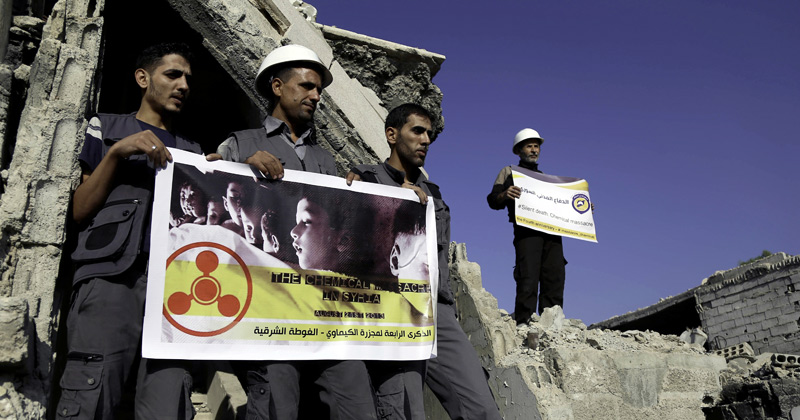 A Syrian boy claims he unwittingly participated in faking a chemical weapons attack in Douma, which prompted a coalition airstrike from British, French and US forces last week.

In an interview released by Russia 24 TV Wednesday, Hassan Diab recalls being lured to a local hospital where he was grabbed by unknown people, doused in water and filmed.

“We were in the basement. Mom told me that today we don’t have anything to eat and that we will eat tomorrow. We heard a cry outside, calling ‘go to the hospital.’ We ran to the hospital and as soon as I entered, they grabbed me and started pouring water on me,” Diab said, according to a translation from Sputnik News.

Diab appears fine in the interview with no evidence or symptoms indicating he suffered a recent chemical attack.

The boy’s father told KP.ru journalist Alexander Kots that he did not believe there were any chemical weapons, and that oblivious participants, including his son, were later fed snacks at the hospital.

“There were no chemical weapons. I smoked outside and felt nothing. I entered the hospital and saw my family. Militants gave them dates, cookies and rice for participating in this film and released everyone to their homes,” Diab’s father said.

Side-by-side comparison photos were created after some claimed on social media that the boy in the video was not Diab.

The al-Qaeda affiliated White Helmets non-governmental organization has frequently been accused of staging attacks on civilians to blame the Bashar Al Assad regime.