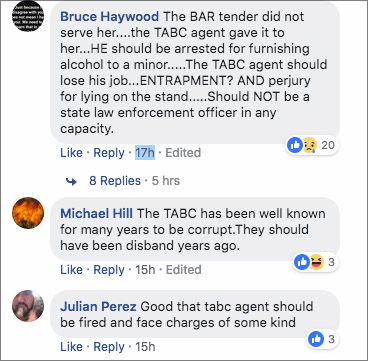 Surveillance footage helped a Texas bartender stay out of jail after Texas Alcoholic Beverage Commission (TABC) agent Jonathan Jergins made false claims about alcohol being illegally served to a minor.

The bartender, Allen Frick, was approached by Jergins and two young girls hired by TABC while working at Rebel Draft House, a popular bar across the street from the Texas A&M University campus.

The September 2018 sting operation was standard – the minor asked for alcohol, showed her I.D. and waited to see if the bartender would serve her.

According to the agent, Frick checked her driver’s license and “poured the drink out of the beer tap and served the alcoholic drink to the minor.”

Knowingly serving alcohol to a minor is a class A misdemeanor punishable by a $4,000 fine and up to 1 year of jail time, which is exactly what Frick was charged with.

In Texas, it is legal for underage individuals to consume alcohol in the presence of the minor’s adult parent and Frick claims he asked the girl if Jergins was her father and that she nodded and replied, “Yeah.”

According to the Houston Chronicle, “Frick’s attorney, Craig Greening, said the Brazos County attorney quickly offered a deal — a fine, probation, community service hours. Yet the bartender balked. Despite the TABC agent’s report, Frick insisted Jergins wasn’t telling the truth about what actually happened that night.”

Luckily for Frick, surveillance cameras captured the sting on video and proved Jergins was not telling the truth.

Video shows the minor hand her I.D. to Frick who then gestures toward agent Jergins and begins pouring a beer.

Frick then sets the drink on the bar counter and Jergins, not the minor, grabs the beer and hands it to the young girl.

Judge for yourself by watching the exchange below:

Frick’s attorney Craig Greening kept the footage a secret during the trial and gave Jergins a chance to come clean during examination.

Greening asked Jergins, “It would have been against policy for you to get – for you to receive the beer from Allen and then give it to the [teen]; is that right?”

Jergins responds, “Well, it wouldn’t happened that way, no sir.”

Greening then said, “Okay. Because it would be illegal for you to give [the teen] beer, right?”

Jergins said, “But that’s not the way it occurred, sir.”

Jergins goes on to say that it would be illegal for him to give a minor alcohol.

Since the footage clearly contradicted Jergin’s testimony, Frick was acquitted by the jury in a trial only lasting one day.

Highlighting the corruption of the TABC agent, Greening said, “Were it not for the video, my client could have been a convicted criminal.”

TABC spokesman Chris Porter said an internal investigation into the inaccurate testimony has been opened and Brazos County District Attorney Jarvis Parsons is reviewing the case to find out if it warrants prosecution.

Check out a glimpse of the public backlash on Facebook as users responded to the surveillance video with anger and frustration. 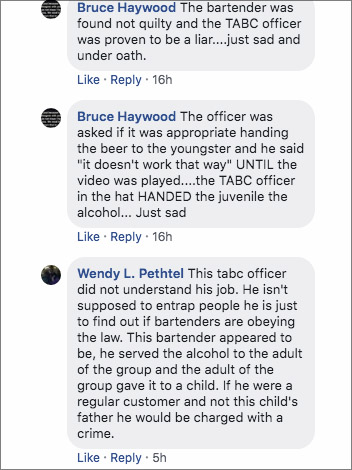 This isn’t the first time TABC has been under fire for questionable tactics, as reported by the Houston Chronicle in an article titled, “Bars turn to security cameras to fend off Texas booze police.”