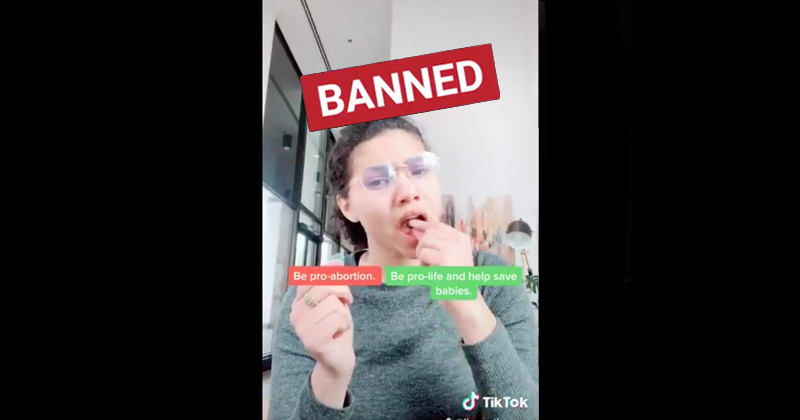 The Chinese-owned platform, popular amongst millennials and “zoomers,” initially told Live Action its account was permanently removed “due to multiple Community Guidelines violations.”

The following “educational” video, featuring a woman choosing to “Be pro-life and help save babies” instead of being “pro-abortion,” was reportedly the straw that broke the camel’s back.

TikTok, a platform with over 800 million active users, has banned pro-life organization @LiveAction

Why is Big Tech so scared of a pro-life message getting out to our youth?

My team grew the largest pro-life voice on the platform

This video has 1.2 MILLION watches. pic.twitter.com/f3BRVR7YD9

On Friday, Live Action showcased multiple innocuous pro-life videos which were banned, and disputed their TikTok account termination, claiming “By censoring the pro-life message, TikTok is placing lives at risk.”

The pro-life videos were played alongside other TikTok videos promoting abortion and featuring simulated harm to unborn babies.

Live Action has been banned from TikTok, one of the largest social media platforms in the world.

By censoring the pro-life message, Tiktok is placing lives at risk.

“Live Action joined the platform in 2019 to reach TikTok’s young demographic, 41% of which is between the ages of 16 and 24,” a message from the group stated.

A Live Action representative confirmed to FaithWire.com that “TikTok was our next frontier, really… It was an amazing way to reach the next generation. The users are majority young people, young women, our demographic. And we grew to 21,000 followers in less than four months.”

On Friday, TikTok reinstated Live Action’s account, claiming the termination was a “result of human error.”

In a statement to National Review, the company wrote:

“TikTok is a platform for creative expression that welcomes diversity of users and viewpoints… Following a review, we have determined that there were no violations of our Community Guidelines, and the issue was the result of a human error by a moderator. We apologize for the mistake and have reactivated the account.”