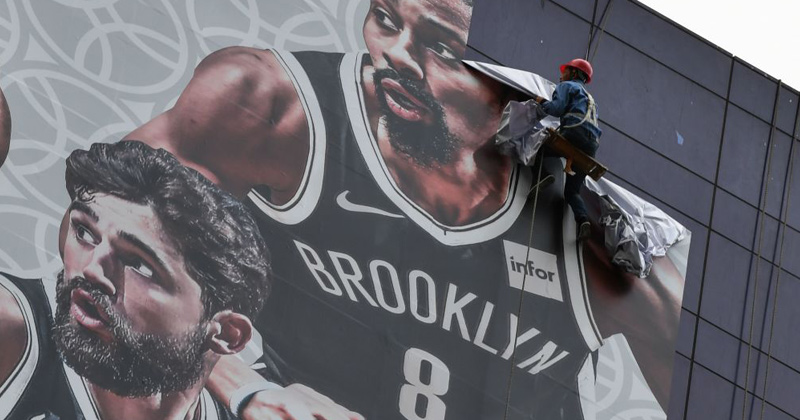 Despite nearly every coach, player and staff member apologizing on behalf of Morey, China is severing financial connections with the league and discontinuing scheduled broadcasts.

Ahead of a preseason game between the Brooklyn Nets and the Los Angeles Lakers set to take place Thursday, multiple videos have surfaced of NBA memorabilia being purged from the public view in Shanghai.

The move has many wondering if the game will be canceled.

The NBA's relationship with China is evaporating. They're painting over the Rockets logo in Shanghai. 😳

Shanghai is removing NBA ads.
Goodbye to the NBA. pic.twitter.com/8DeXdOcc63

All over Shanghai, they’re taking down banners and signs for the NBA in general, and for Thursday’s Lakers-Nets game specifically.
Game is still officially “on”…as of now. Lots of shrugged shoulders over whether it will actually happen. pic.twitter.com/6MFqnWGjFN

Video shows how logo of Chinese Smartphone maker Vivo – an NBA advertiser – was covered on an NBA promotional sign.

President Trump criticizes Steve Kerr and Gregg Popovich — both vocal critics of Trump — when asked about China putting pressure on the NBA: "They talk badly about the United States, but when it talks about China, they don't want to say anything bad" https://t.co/rR2dKOelYD pic.twitter.com/am9hMQcGG3

NBA Commissioner Adam Silver, one of the only people to defend Morey’s free speech, is currently visiting Shanghai in an attempt to rekindle the league’s relationship with the communist country.

Alex Jones is live right now breaking down this ChiCom development and more.