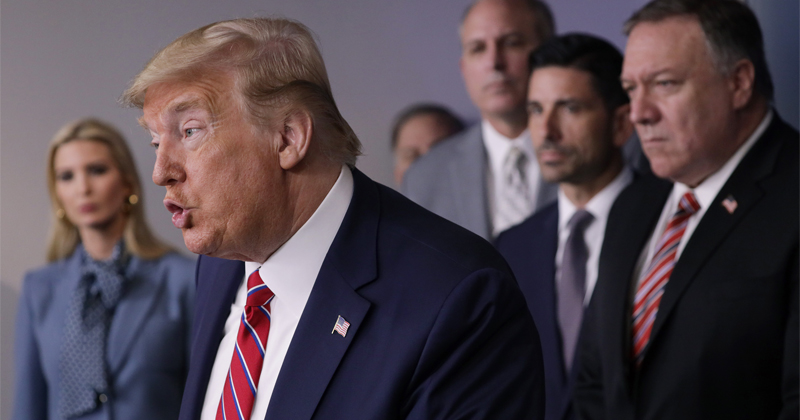 Trump had told reporters to focus their questions at Secretary of State Mike Pompeo because he needed Pompeo to return to “the State Department, or as they call it, the ‘Deep State Department.'”

“Secretary of State Pompeo is extremely busy so if you have any question for him right now, could you do that?” said Trump to reporters. “Because you know what I’d like to do, I’d like for him to go back to the State Department, or as they call it, the ‘Deep State Department.’ You know, Mike?”

Fauci’s face says it all. pic.twitter.com/SUBpWN6H5D


The remark caused Dr. Anthony Fauci, a prominent member of the president’s coronavirus task force and director of the National Institute of Allergy and Infectious Diseases, to bury his face in his hands.

Pompeo later said he had no problem with the president’s comment after a reporter questioned the “appropriateness” of it.

Pompeo indicates he has no problem with Trump calling his department "the deep state department" pic.twitter.com/ZTfxS3M1b2


During the same press briefing, Trump slammed an NBC reporter for using his position to stir “sensationalism” across America, adding he “ought to be ashamed” of himself for using his question to focus on ‘scared Americans.’

Trump absolutely destroyed this reporter for being sensationalistic. pic.twitter.com/ustpdVomK4


“I say that you’re a terrible reporter,” said Trump. “I think that’s a very nasty question. And I think it’s a very bad signal that you’re putting out to the American people.”

“You ought to be ashamed of yourself.”

Dr. Francis Boyle joins The Alex Jones Show to break down the president’s response to the coronavirus pandemic.