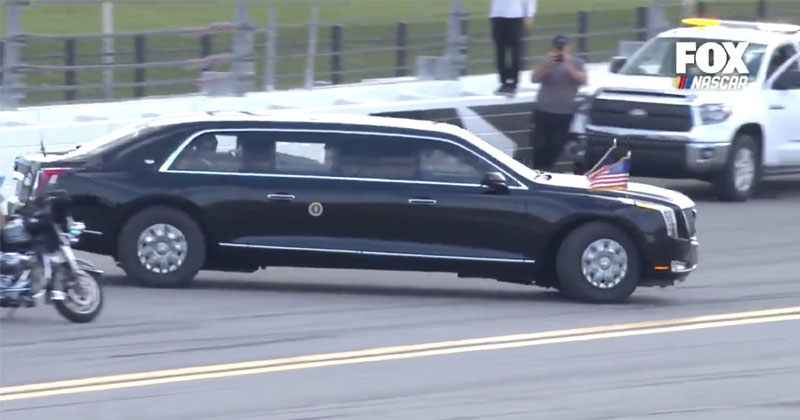 President Trump visited the Daytona 500 on Sunday, where he took several laps around the track in “The Beast” presidential limo before the race began.

In The Beast, @realDonaldTrump and @FLOTUS take a lap around the Daytona International Speedway before the start of the #DAYTONA500! pic.twitter.com/yemfsy0wN2

Trump is on the track at the #Daytona500 @realDonaldTrump #DaytonaDonald pic.twitter.com/5Pbj8xQko6

"That's a sight for the ages right there." #Daytona500 pic.twitter.com/7hdzzawhDz

Trump had flown over the stadium in Air Force One, drawing cheers and applause from the crowd.

“U-S-A, U-S-A, U-S-A,” breaks out as Air Force One lands at the Daytona airport. pic.twitter.com/DOFVX2PalB

Trump was named grand marshal for the event, where he said to the drivers: “Gentlemen start your engines!” to kick off the race.

Video: Here's the MASSIVE reception President @realDonaldTrump and @FLOTUS Melania Trump received upon being announced at the start of the opening ceremonies for the 62nd #Daytona500

MANY, MANY, MANY chants of U-S-A! U-S-A! pic.twitter.com/q6QidNbTcP

Driver Joe Nemechek is racing in his car emblazoned with the Trump/Pence 2020 campaign logo.

Check out the car @FrontRowJoe87 will be racing with at the #Daytona500 pic.twitter.com/HusJnj1hLf

The Trump 2020 car for Joe Nemechek has arrived in Daytona.

Additionally, the Trump campaign plans to air a new ad during the race touting the president’s many achievements.

“NASCAR fans are patriots who support the president in huge numbers, so we definitely wanted to communicate directly with them about keeping America great during the great American race,” campaign manager Brad Parscale said, according to a report from nj.com.

Trump is also delivered an address the crowd before the race.

He is just a big hairy American winning machine!