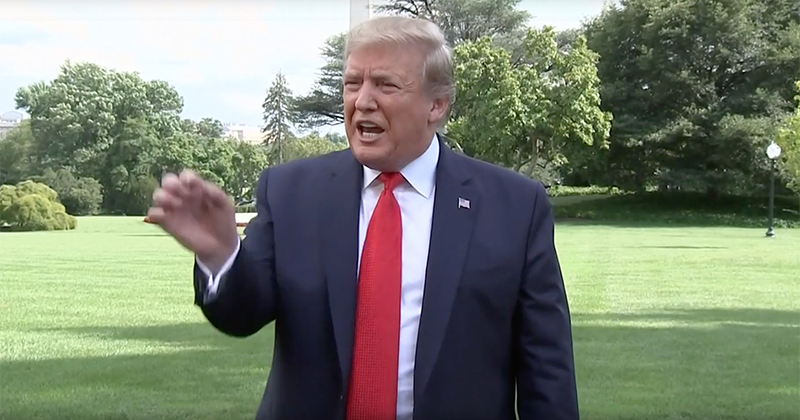 On the heels of Robert Mueller’s befuddled and confused performance during the congressional hearing, President Trump was besieged by reporters on the White House lawn, where he took the opportunity to destroy them right to their faces.

The reporters were still grasping at straws, asking Trump questions such as if he was concerned about indictment if he leaves office in 2021, and to react to Mueller saying Trump is ‘generally untruthful’.

“When you saw Robert Mueller’s statement, the earlier statement and then he did a recap, he did a correction later on in the afternoon and you know what that correction was and you still ask the question. You know why? Because you’re fake news, you’re one of the worst.” Trump roared back at the reporter.

“Again, you’re fake news and you’re right at the top of the list also. Let me just tell you, go back to what — it is not what he said. Read his correction,” Trump said to another reporter.

I asked President Trump what do you make of Robert Mueller saying your written answers were generally untruthful. Trump said the question was untruthful and claimed that Mueller never said that. This video is clear evidence that Trump was wrong. pic.twitter.com/J9rqU1pjUp

Trump later tweeted about the exchange, noting that it was as if the reporters didn’t even see the hearing:

“The kind of questions the White House Correspondents were asking is almost like they didn’t see what went on at the hearings!” @JesseBWatters The hearings were a disaster for Robert Mueller & the Democrats. Nevertheless, the Fake News Media will try to make the best out of it!

Trump declared victory during the appearance, stating that Mueller’s “performance was obviously not very big. And you know what? The Democrats thought they could win an election like this. I think they hurt themselves very badly for 2020.”

“They are devastated. The Democrats lost so big today. Their party is in shambles right now. They’ve got The Squad leading their party. They are a mess.” Trump added.

Mueller’s testimony was a shambles and a disaster for the Democrats, as he permanently appeared confused, and frequently asked for questions to be repeated.

He even admitted he is not familiar with Fusion GPS, the company behind the fake dossier at the heart of his own investigation.

He was also caught in huge lies:

A string of Democrats, Never Trumpers, and even Michael Moore, admitted defeat and that any chance of impeaching Trump has evaporated:

A frail old man, unable to remember things, stumbling, refusing to answer basic questions…I said it in 2017 and Mueller confirmed it today — All you pundits and moderates and lame Dems who told the public to put their faith in the esteemed Robert Mueller — just STFU from now on

On substance, Democrats got what they wanted: that Mueller didn't charge Pres. Trump because of the OLC guidance, that he could be indicted after he leaves office, among other things. But on optics, this was a disaster. #MuellerHearings

Seems pretty clear at this point that Mueller is not the best spokesperson for his own report.

These could both be true: Robert Mueller isn’t a dazzling or dynamic or even a particularly compelling witness at a congressional hearing; and his report, along with his testimony, is entirely truthful and damning.

…who, as hard as they tried, were unable to establish either obstruction, conspiracy, or collusion between the Trump campaign and Russia. It is also clear that the Special Counsel conducted his two-year investigation unimpeded.