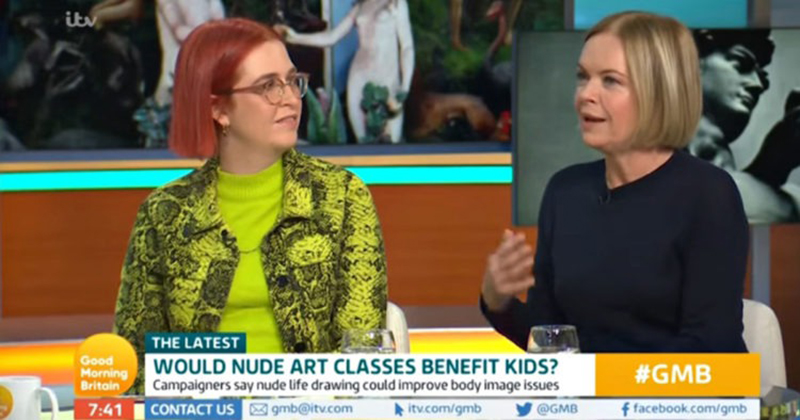 The UK has recently made several bizarre additions to its curricula in relation to sexual education and other sexualized themes.

The guest on the show, a campaigner and “professional self-appointed sexpert,” Flo Perry, told the show’s presenters Kate Garraway and Ben Shephard that nude art classes “might make us more relaxed about nudity and our own bodies,” according to Wales Online.

Perry believed that such classes would demystify the body and reduce self-consciousness in children, boosting their body confidence.

Despite her arguments, viewers were not pleased with the idea of exposing children to her suggestions.

One viewer said, “Normalizing naked strangers is not a good thing to do to kids.”

Another remarked, “What actually goes on in the UK???”

A third agreed, saying, “Where do we get these nut-jobs from.”

“Absolutely insane. Totally disappointed that would even get brought up.” A fourth added.

As Perry attempted to argue for nude art classes for children, the camera zoomed out revealing a naked cross-legged man being depicted by a portrait-drawing artist.

“But I think that we have to examine our own reactions to that and think ‘why do we have this disgust thing?’”

In spite of her candor, the wider public failed to agree with her message.

Another said, “Why on earth would nude art classes benefit kids? The world’s gone bonkers.”

She continued, “Is it because nudity is so sexualized in our culture? And actually if we are exposed to it in a different form, it might make us more relaxed about nudity and therefore our own bodies.”

Would you be comfortable with your child taking part in life drawing classes?

A poll was launched following the strange debate where 76% of respondents would not feel comfortable with their children being exposed to nude art classes.