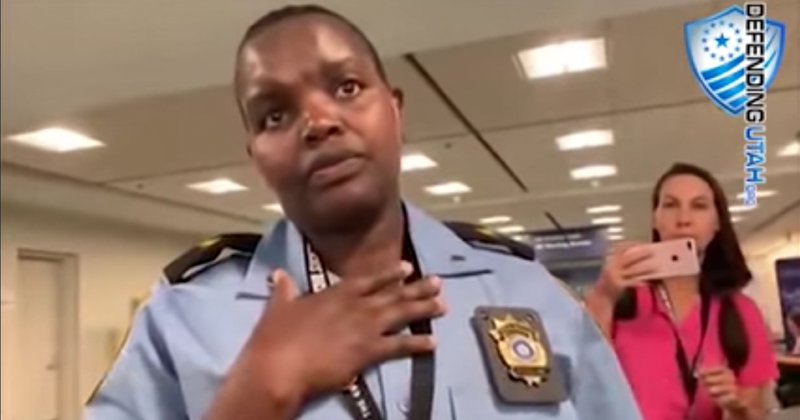 In the first United Nations conference outside New York City in the United States of America, the UN took over Salt Palace in Salt Lake City, Utah and claimed it was “international territory.” In the process, they were shutting down a journalist’s rights to video.

On August 26, 27, 28 of 2019, the United Nations procured the venue of Salt Palace in downtown Salt Lake City, Utah for a conference.

The Utah state legislature provided $650,000 for the conference.

However, as a journalist attempted to video the conference, specifically one of the security personnel, who is clearly a foreigner, she was told she didn’t have permission to video the woman’s face and that Salt Palace was designated “international territory.”

Take a look at this report from Defending Utah.

In fact, this was referred to not as Salt Palace, but as a “compound.”

According to DefendingUtah, “During the conference, pushing the UN’s anti-family/anti-property rights/ anti-American Agenda 2030, journalists covering the event were confronted by UN officers.”

I spoke with DefendingUtah co-founder Ben McClintock via phone and he told me that in addition to the $650,000 the state legislature provided, Salt Lake City chipped in another $100,000 or so for the event.

Consider all of it is taxpayer money, including the money used to build and maintain Salt Palace.

So, why is Utah allowing such tyranny in the middle of an American city? Why is the UN, an entity that claims it is for human rights, unless they deem it otherwise, telling journalists they can’t video in an American city?

DefendingUtah also has set up a petition page at UnitedNationsUtah.com.

They also provide the following information:

The U.N. is convening its 68th annual Civil Society Conference in Salt Lake City to further the 2030 Agenda for Sustainable Development (more on Agenda 2030 below).

The UN wants “to make cities and human settlements inclusive, safe, resilient, and sustainable by 2030.”

Targeting The Youth
Indoctrination in the name of “inclusivity, climate change, peace, economic opportunity for our youth, and the development of infrastructure and technology.”

The Reality
All the while they are destroying the environment, building a Big Brother total surveillance state, creating worldwide conflict and erasing human rights.

Your Tax Dollars At Work!

The U.N. Requested $755,000 From The Utah Legislature As ‘Enhancements’ For The Event.

What Do The Leaders Say?

“I can think of no better time, and no better place than Salt Lake City, for the United Nations to re-emphasize and reintroduce its vision, mission, and values to the American people.”

“The Sustainable Development Goals are a global framework for cooperation to tackle the great challenges of our day.  Cities are growing so quickly that it is imperative we build them thoughtfully and make extra efforts to ensure that no person or group is left behind.  Our outcome document will reflect what civil society demands from Governments and corporations, but most importantly what we ourselves can concretely do as empowered citizens to ensure our communities are inclusive and sustainable.”

“We are carving out a dedicated space within the conference for youth-led conversations, and as equal partners are contributing to every aspect of planning and the broader outcome document.  We want not only to be visible as part of the legacy of this conference but also to inform the broader conversation on behalf of youth around the world who will inherit this earth.”

The U.N. Does NOT Have Utah’s Best Interests In Mind

Basic Foundation Of The U.N.

Not only does the Charter Organization not prevent future wars, but it makes it practically certain that we shall have future wars, and as to such wars it takes from us the power to declare them, to choose the side, to determine what forces and military equipment we shall use in the war, and to control and command our sons who do the fighting.“

Every Military Action Since WWII Has Been A U.N. War; Not Declared By Congress, But Via U.N. Resolutions

“Syria won a seat on the U.N. Security Council … with overwhelming global support and no opposition from the United States, despite its prominent position on the U.S. list of nations sponsoring terrorism.”

Deciding If Your Baby Lives

“In order to stabilize world population, it is necessary to eliminate 350,000 people a day. It is a horrible thing to say, but it’s just as bad not to say it.”

– Oceanographer Jaques Cousteau, Published In The Courier, A Publication Of UNESCO

“We strongly endorse community initiatives … to encourage the disarming of civilians….”

– Our Global Neighborhood, Published In 1995 By The UN-Funded Commission On Global Governance

“Every child is our child.”

“Secretary General Boutros Boutros-Ghali … urged the [UN] to consider imposing its own taxes to become less dependent on the United States….”

Adopted at the 1992 United Nations Conference on Environment and Development (UNCED) in Rio de Janero, Agenda 21 is described as:

“A profound reorientation of all human society, unlike anything the world has ever experienced a major shift in the priorities of both governments and individuals and an unprecedented redeployment of human and financial resources. This shift will demand that a concern for environmental consequences of every human action be integrated into individual and collective decision making at every level.” – Agenda 21: The Earth Summit Strategy to Save Our Planet by Daniel Sitarz

“an ethos of global citizenship is required in order to fulfill this bold, people-centered, universal, and planet-sensitive development framework.”

“Participating in a U.N. advocated planning process would very likely bring out many of the conspiracy-fixated groups and individuals in our society… This segment of our society who fear ‘one-world government’ and a U.N. invasion of the United States through which our individual freedom would be stripped away would actively work to defeat any elected official who joined ‘the conspiracy’ by undertaking Local Agenda 21. So we call our process something else, such as comprehensive planning, growth management, or smart growth.“

These people are not American.  They are part of a foreign government.  They should be indicted as traitors to the people of Utah and the united States.  It’s time we got out of the UN and got the UN out of the US!

Infowars reporter Rob Dew Interviews Amy Brown and the Brown family over her shock footage of UN security kicking her and her family out a UN brainwashing event by declaring the public building international territory.