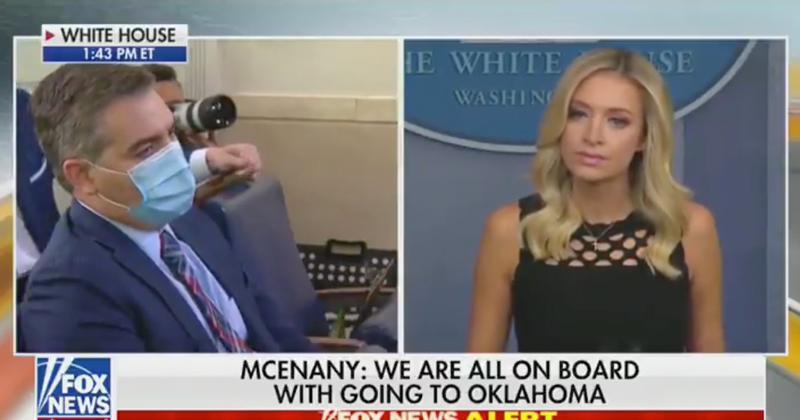 “Why is the president sharing fake videos on Twitter about two toddlers…it seems as though he’s exploiting children to make some sort of crass political point? Why is he sharing fake videos?” Acosta asked McEnany, referring to the following video shared by Trump Thursday:

“He was making a point about CNN specifically,” McEnany responds. “A point that CNN has regularly taken him out of context. That in 2019, CNN misleadingly aired a clip from one viewpoint repeatedly to falsely accuse the Covington boys of being ‘Students in MAGA gear harassing a Native American elder.’ That’s a harassing video, a misleading video about children that had really grave consequences for their future.”

“So you’re saying it is OK to exploit to two toddlers hugging one another on a sidewalk to make some sort of political point,” Acosta retorted. “As you know, the president has described members of the press as ‘fake news’ during the course of this administration. When you share a fake videos like that, doesn’t that make you fake news?”

“I think the president was making satirical point that was quite funny if you go and actually watch the video,” replied McEnany. “The point was it was a play on CNN reportedly taking the repeatedly taking him out of context.”

Watch the exchange below:

Elsewhere in the press conference, McEnany said she would be attending President Trump’s rally on Saturday in Tulsa, Oklahoma, but that she wouldn’t be wearing a face mask because it’s a “personal choice.”

“Will you and other White House officials be wearing masks at the rally?” Acosta asked.

“It’s a personal choice, I won’t be wearing a mask,” McEnany answered.

CNN's Jim Acosta: "Will you and other White House officials be wearing masks at the rally?"
Kayleigh McEnany: "It's a personal choice, I won't be wearing a mask."

Acosta: "And why won't you wear a mask?… Is it because the President will be disappointed in you?" pic.twitter.com/p4oLP9ttpN

“And why won’t you wear a mask?… Is it because the President will be disappointed in you?” Acosta pressed.

“It’s a personal decision, McEnany answered. “I’m tested regularly. I feel that it’s safe for me not to be wearing a mask and I’m in compliance with cdc guidelines which are recommended but not required.”

Check out the full press conference:

On the list of things that are now racist and hateful you can include rope swings.