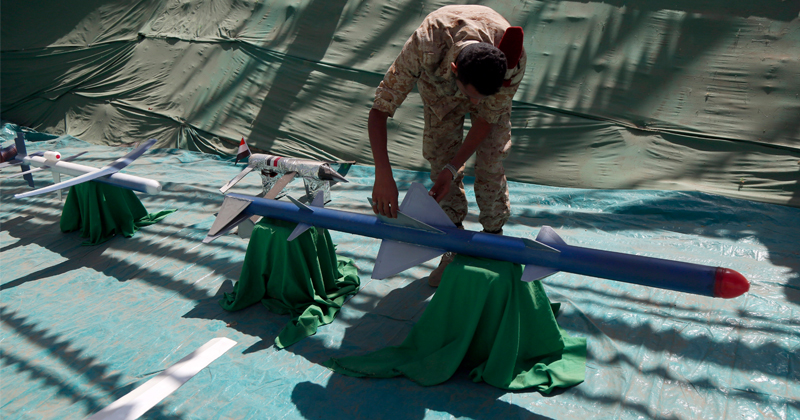 In a ceremony inaugurating the systems in Sana’a on Sunday, Houthi Supreme Political Council President Mahdi al-Mashat said the SAMs included the Fater-1 (‘Innovator-1’), and the Thaqib (‘Piercer’) line including the Thaqib-1, Thaqib-2 and Thaqib-3.

“The new defence systems will change the course of the battle with US-Saudi aggression, and will provide a start to more sophisticated and effective defence systems in countering enemy air targets,” al-Mashat was quoted as saying.

The systems, said to have been “developed with purely Yemeni expertise,” were reported to have completed testing and entered into service. No further information was made available regarding their characteristics.

According to reports, the missiles were reverse-engineered from Soviet designs inherited from the People’s Democratic Republic of Yemen, or South Yemen. The Houthis’ use of old Soviet-era equipment has been widely reported, with previous reports pointing to the use of an old surface-to-air missile with a 350 km range, as well as Scud ground-to-ground missiles with a range of up to 1,000 km. Houthi military modernization efforts have been hampered by the tight air, sea and land blockade of the country.

On Saturday, Houthi media reported that a Fater-1 missile was launched against a Saudi-coalition jet fighter, forcing it to flee Yemeni airspace. Last week, the coalition confirmed that a Saudi Royal Air Force Tornado strike fighter-bomber had been destroyed over northern Yemen, with Houthi media posting footage of the plane being shot down by a SAM.

English subtitles have been added to the song. pic.twitter.com/97q0OVpX5E

Yemen became mired in a foreign-backed civil war in 2015, after an uprising by the Houthi movement ousted President Abd Rabbuh Mansur Hadi. The president fled to Riyadh and asked Saudi Arabia to help restore him to power. In March 2015, Saudi Arabia and a coalition of mostly Gulf allies, as well as Egypt, Jordan, Morocco and Sudan began a campaign to dislodge the Houthis. Five years on, the Houthis are still in control of large areas of the country, and have engaged in a campaign launching drones and ballistic missiles into southern Saudi Arabia.

Saudi Arabia and its US allies have repeatedly accused Iran of providing the Houthis with advanced missile and drone capabilities. Last week, the Pentagon reported on the interdiction of a collection of “uniquely Iranian-designed” missiles said to have been destined for Yemen. Iran has denied claims of its involvement in Yemen in the past, pointing to the blockade around the country. The Houthis have similarly downplayed any affiliation with Tehran, and insisted that all their weapons are domestic designs.

The conflict in Yemen has led to the deaths of up to 102,000 people, with the UN estimating recently that some 22 million people, or 75 percent of the country’s population, are in dire need of humanitarian assistance.

Spiro Skouras joins The Alex Jones Show to break down the use of martial law in China during the coronavirus outbreak.