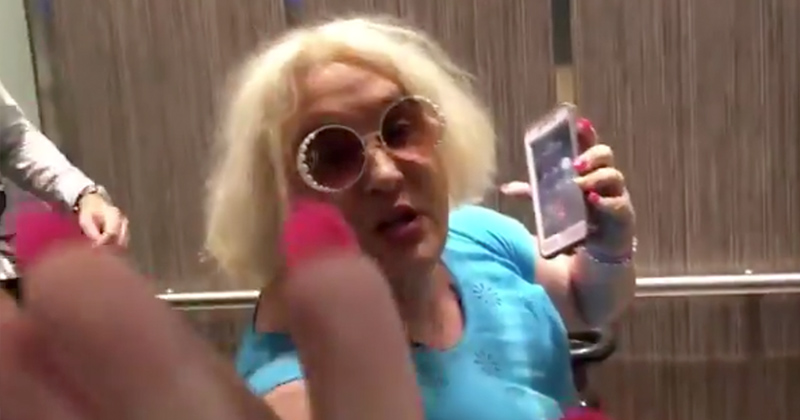 Update: Dan Dicks is attending a court hearing for Yaniv and says Jessica wanted him removed, but a judge denied the request.

We’re on a break at this hearing and “Jessica” wanted me removed before it started…the judge refused to make it a “safe space” for him and I’m aloud to stay 🙂 Stay tuned for my coverage, heading back in now!

Yaniv claims he needs security due to “violent protesters,” but Dicks says he has video proving Yaniv was the only violent person.

Full unedited video coming soon…we’ll see who the violent one was 😉 https://t.co/WPOoOxE74j

Security guards have allegedly denied Yaniv’s request for protection when exiting the courthouse.

A transgender LGBTQ activist who has been making plenty of news this month was caught on camera freaking out on documentary filmmaker Dan Dicks.

The Canadian activist, Jessica Yaniv, threatened to pepper spray Dicks, pulled a fire alarm in an elevator and called the police.

A woman with Yaniv, allegedly his mother, slapped Dicks’ camera from his hands while shouting, “Go out now.”

This is “Jessica” Yaniv loosing his mind after I introduced myself. He called 911, pulled a fire alarm, threatened to pepper spray me then had his mom physically assault me! Full video coming soon, this guy is completely unhinged! @trustednerd @PressForTruth pic.twitter.com/GB473betEi

Dicks tweeted, “So I was just assaulted, threatened with pepper spray and had the cops called on me by ‘Jessica’ Yaniv while covering his hearing!”

So I was just assaulted, threatened with pepper spray and had the cops called on me by “Jessica“ Yaniv while covering his hearing! Stay tuned for a crazy video this dude is unhinged! @PressForTruth @LeighStewy

Yaniv has been receiving a lot of media attention lately after filing human rights complaints against fifteen female beauticians who refused to wax his genitals.

Earlier this week, Yaniv made headlines again after promoting an event for LGBTQ swim for youth aged 12-24 that encouraged them to “go topless” and barred parents from attending.

Yaniv also once sent sexual messages to a 14-year-old girl on Facebook, according to a report by the Post Millennial.