We are witnissing the triumph of Ron Paulism in the United States. The corporate media will avoid reporting it. They try their best to ignore Ron Paul’s 30 plus year intellectual march through our institutions.

But the facts in Pew Research’s 50 year survey of US views of “America’s place in the world” do not lie: This year the highest percentage of Americans ever — 53 percent — agree with the statement that “the US should mind its own business internationally and let other countries get along the best they can on their own.” (See illustration below)

This means that despite the Mephistophelian temptations of the neoconservatives, offering war, interventionism, “responsibility to protect,” and humanitarian bombs, Americans are behind Ron Paul and the peacemakers — more than ever.

There is no major political figure in the United States who has more clearly identified himself with the cause of non-interventionism both at home and abroad.

When the Georgia/Russia war broke out in 2008, arch-neocon Senator John McCain incomprehensibly said that “we are all Georgians now.” He meant that we should go to war with Russia to back up a Georgian provocation. His slogan is laughable now, particularly as the facts have come out about the war.

But we can say this with all the facts to back us up: “We are (mostly) non-interventionists now!” We are in the growing majority, but still we have to fight the powers-that-be to get our message heard. The censorship and propaganda against our message is strong. The war machine does not give up easily.

Please continue to support the Ron Paul Institute’s efforts to advance Ron Paul’s important work. Read our website, share the articles, follow us onFacebook and Twitter, and if you can please financially support our efforts. Ron Paul is winning. Let’s help him! 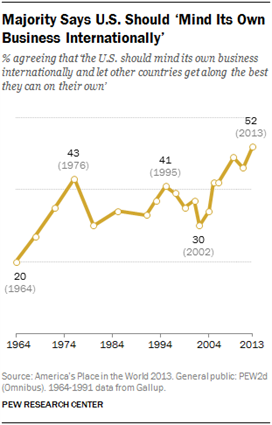