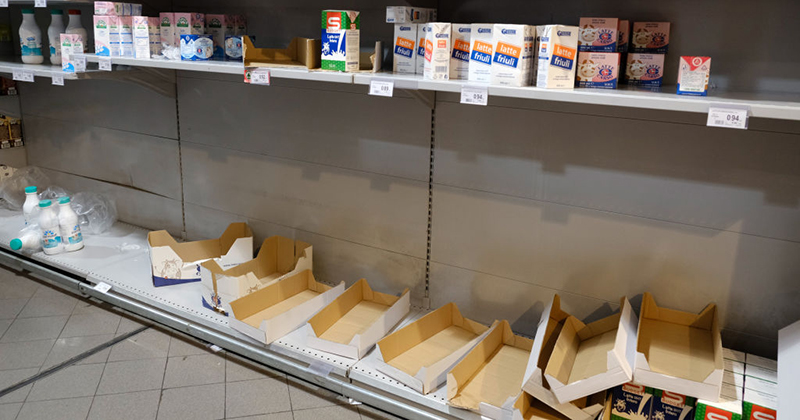 We have already seen it happen all over the globe.

In China it is becoming increasingly difficult for ordinary citizens to get essential supplies, there have been very long lines to buy face masks in Hong Kong and elsewhere, and in Italy crazed residents have stripped store shelves empty of pasta and other staples in recent days.

As the number of confirmed cases continues to rise at a very frightening pace, the “panic buying” that we have been witnessing is going to get even worse.

Meanwhile, global supply chains are becoming increasingly strained due to this coronavirus outbreak, and it has already become quite difficult for many stores to get certain things for their customers.

Here in the United States, we have never experienced anything like this.  We are accustomed to stores that are absolutely teeming with products, and any “shortages” are usually very temporary.

Coronavirus has the potential to become a global pandemic, temporarily emptying retail store shelves in the coming months and depressing some consumer-facing businesses, experts say, with government officials advising families to take measured steps to stock up on certain essentials.

In fact, NBC News is reporting that we should anticipate seeing “bare shelves” in some stores “by mid-April”…

If production isn’t restarted soon, the bottlenecks could lead to some bare shelves at brick-and-mortar retailers by mid-April, with stores such as Target and Walmart at the greatest risk, Kelly wrote.

Supply chain disruptions and shortages have the potential to hit retailers such as Best Buy, Michaels and Wayfair in the near future, considering that 60 percent to 70 percent of their inventory comes from China.

That doesn’t sound good at all.

Matt Bracken guest hosts The Alex Jones Show to break down the spread of the covid-19 virus and how it has reached America.

Protective face masks are one of the items that is most in demand right now.  When my wife went to our local Home Depot the other day, there were barely any left at all.  Apparently “hoarding” of masks is taking place on a global scale, and manufacturers are warning that they won’t be able to keep up with demand.  The following comes from the Wall Street Journal…

Hospitals and public-health officials in the U.S. and Europe are rationing medical masks and scrounging for more, as they prepare for a potential widening of the coronavirus epidemic.

Global hoarding has left European wholesalers with empty shelves. Manufacturers outside China say they won’t be able to fill an exploding stack of orders for months. U.S. hospitals and medical-supply companies have reported dwindling mask inventory and partial or delayed shipments as the surge in global demand for protective equipment enters a second month.

All over the western world, supplies of face masks are rapidly dwindling.  When one reporter searched around London for a mask, she could only find one pharmacy that still had any for sale…

Meanwhile, pharmacies from Germany to Canada to Italy and the U.K. are all low on medical mask supplies, according to posts circulating on social media.

In a post on Twitter, a journalist for Agence France-Presse said that the only pharmacy in central London she could find stocking face masks was selling them for approximately $3.25 a piece.

Of course masks aren’t the only thing that people are “panic buying” right now.

In Hawaii, a wide range of essential supplies have been “flying off the shelves”…

Supplies were flying off the shelves Wednesday, with some shoppers taking pictures of empty shelves at stores across Oahu. This comes after a message from the Health Department to stock up on necessities. There aren’t any coronavirus (COVID-19) cases here in Hawaii, but health officials want people to have food, supplies and medicine just in case.

And after a very long downturn, all of a sudden emergency food has become a very hot commodity again.

In fact, it appears that Costco is currently tapped out…

Costco Wholesale, which is one of America’s biggest suppliers of long-term storable food, sold out of all their “emergency food kits” on their website after the CDC warned that Americans should be prepared in case the coronavirus becomes a pandemic.

Visitors to the “Emergency [Food] Kits & Supplies” section of their website are currently greeted with a message saying, “We’re sorry, no products were found.”

Keep in mind that all of this is happening even though we haven’t seen one single American die from this virus yet.

So if things are already this crazy, what is it going to be like if thousands of Americans start dropping dead during this outbreak?

On Amazon, one of the biggest issues has been price gouging.  In fact, “tens of thousands of offers” have been removed in recent days because of “unfair prices”…

Amazon told CNBC it has blocked or removed more than 1 million products that made suspect or misleading claims about the coronavirus. The company said it also suspended or took down tens of thousands of offers from third-party merchants it accused of charging customers unfair prices. Amazon didn’t give specific figures for how many listings it removed or suspended for price gouging.

“There is no place for price gouging on Amazon,” an Amazon spokesperson told CNBC in a statement. The spokesperson pointed to Amazon’s “long-standing” policy on fair pricing, which states that the company doesn’t allow pricing practices that harm consumer trust, such as setting a price on a product that is “significantly higher than recent prices on or off Amazon.”

But what is an “unfair price” in this environment?

A free enterprise system is supposed to dynamically respond to changes in supply and demand, and right now our economic environment is shifting very rapidly.

In the coming months, economic conditions will continue to evolve quickly, and that will especially be true if manufacturers in China cannot resume normal activity.

Many Americans don’t realize this, but we are extremely dependent on imports from China, and that is especially true when it comes to pharmaceutical drugs…

The U.S. relies on China for electronics, clothes, toys and, increasingly, prescription drugs. About 90% of the active ingredients used by U.S. companies in drug manufacturing come from China, which has prompted politicians and public health experts to express concern over potential shortages of common generics.

We should have never allowed so much drug manufacturing to move over to China, and now we may end up paying a very great price for doing so.

Even though I hope that the Trump administration is 100 percent correct and that this outbreak will start to subside once warmer weather arrives, I am still encouraging everyone that I know to prepare for a long-term pandemic.

I have been listening very carefully to what medical experts all over the globe have been telling us, and I have found their arguments to be quite persuasive.

The CDC is “asking the American public to prepare for the expectation that this might be bad”, and I plan to heed that advice.

And if you do prepare and this outbreak is not as bad as initially feared, at least you will be prepared for the next great challenge that is ahead of us.