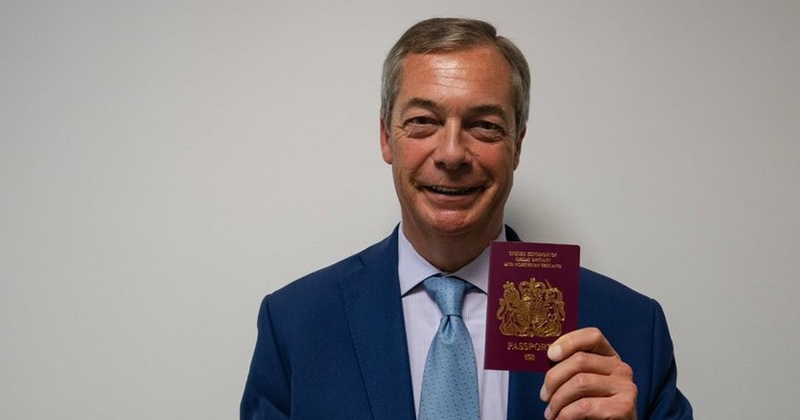 Brexit Party leader Nigel Farage has revealed he’s received his new UK passport, without the words “European Union” on the front cover, prompting responses from a deluge of both passionate Brexiteers and irate EU remainers.

Farage posted a picture of himself on social media on Monday, proudly holding aloft his new passport that now simply reads “United Kingdom of Great Britain and Northern Ireland.” The hardline Brexiteer tweeted: “We got our passports back!”

The new passports were introduced on March 29 – the day Britain was originally meant to leave the bloc – with “All British” passports being issued from late 2019, according to the UK government’s website.

Farage has got his hands on one and appears to look so happy about it, the photo has even prompted a number of pro-EU advocates on Twitter to ask whether he had received the German passport which he reportedly applied for – thanks to his German wife.

While others online questioned why he was so “obsessive” and “pleased by slight tweaks to a travel document” that most people in the UK use twice a year.

However, Farage has received praise from other quarters who have thanked him for “helping to get our country back,” and solidarity from those who are pleased that there is “finally no ghastly EU at the top” of the UK passport.

The issue of identity has been at the heart of the febrile Brexit debate and was thrust center stage during the 2016 EU referendum campaign. Rhetoric such as “taking back control” and gaining control over ‘our money, laws and borders’ were frequently brought up by leading Brexiteers.

The likelihood of a no-deal Brexit has increased since PM Boris Johnson vowed to take the UK out of the EU “do or die” on October 31. The prime minister will meet with Germany’s Angela Merkel and France’s Emmanuel Macron this week for Brexit discussions before the G7 summit in Biarritz.

Alex Jones breaks down why Trump wants to purchase Greenland, and how land purchases in America’s history have contributed to its greatness.