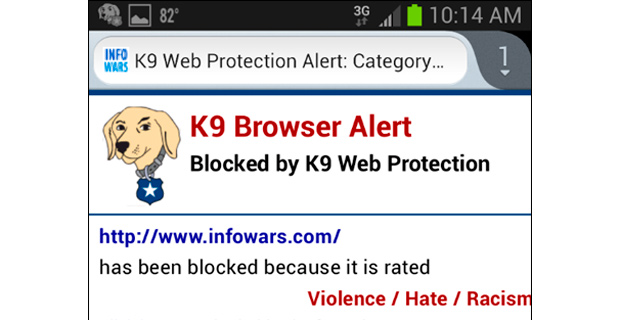 UPDATE: It appears that Blue Coat has backed off and removed Infowars.com from the “Violence/Hate/Racism” category. If anyone is still encountering issues, please e-mail us at [email protected]

A corporate web filtering service is blocking access to Infowars.com by falsely claiming the site promotes racism and extreme violence in yet another example of the ongoing censorship of independent media.

Infowars received numerous e-mails yesterday from viewers who could no longer access Infowars.com, including the free audio streams of the Alex Jones Show, because their companies had blocked access to the site.

Upon investigation, it was determined that every company used Internet filtering software by Blue Coat Systems, which miscategorized Infowars.com as a “Violence/Hate/Racism” site, placing it in the same category as the Ku Klux Klan and a cockfighting league.

Blue Coat described their Violence/Hate/Racism category as “sites that depict extreme physical harm to people, animals or property, or that advocate or provide instructions on how to cause such harm.”

“Also includes sites that advocate, depict hostility or aggression toward, or denigrate an individual or group on the basis of race, religion, gender, nationality, ethnic origin, or other involuntary characteristics,” the description continues. “Includes content that glorifies self-mutilation or suicide.”

As it is very obvious that Infowars.com does not advocate racism or violence, the blacklisting of the site is simply covert censorship, textbook defamation and an act of war against public access to free information.

This is a severe misuse of technology that will only result in the complete disintegration of the Internet from the greatest pinnacle of expression humanity has ever seen to a completely sterilized, tightly controlled medium no different than corporate-run cable news which stagnates the human condition.

And Blue Coat even went beyond simple censorship by deceptively labeling Infowars.com as “racist” and “violent,” which only discourages what would be first-time viewers from visiting the site through unfiltered Internet access because they have been led to falsely believe that Infowars promotes violence and hate in complete opposition to the libertarian non-aggression principle.

Simply put, this is a technological iron curtain working against independent voices which are challenging the status quo and the establishment’s spin on world events.

Other alternative media platforms have similarly been targeted in the past under the guise of “cybersecurity” and “web content management.”

In 2010, for example, the Senate’s Committee on Environment and Public Works told its employees to avoid the Drudge Report, claiming that the independent media giant is “responsible for the many viruses popping up throughout the Senate.”

“On Monday DRUDGE served over 29 million pages with NOT ONE email complaint received about ‘pop ups’, or the site serving ‘viruses’,” read an announcement on the Drudge Report. “The site was seen 149,967 times since March 1st from users at senate.gov and 244,347 times at house.gov. [10,825 visits from the White House, eop.gov].”

“The Systems Administrator may want to continue taking her antibiotic until the prescription runs out.”

The international whistle blowing site Wikileaks was also subject to censorship after Australia banned two of its pages in the country.

Other sites besides Infowars.com have also been miscategorized by Blue Coat.

In the past, the company also labeled New Braunfels Republican Women, the web site of conservative commentator Carolyn Gargaro and Reunion Ministries as “pornography.”

Interestingly, in 2012 Reporters Without Borders named Blue Coat a “Corporate Enemy of the Internet” for reportedly selling its Deep Packet Inspection technology, which can be used to censor the Internet, to some of the most violent and oppressive regimes in the world.

“With DPI, it is possible to look into every single Internet Protocol packet and subject it to special treatment based on content (censored or banned words) or type (email, VoIP or BitTorrent Protocol),” the organization reported. “DPI not only threatens the principle of Net Neutrality, which Reporters Without Borders defends, but also the privacy of users.”

“It makes single users identifiable and, in countries that flout the rule of law and violate human rights, often exposes them to arbitrary imprisonment, violence or even torture.”

Reporters Without Borders also cited a study by the University of Toronto’s Citizen Lab which found that Blue Coat software is in use by multiple governments.

In other words, the company that listed Infowars as a “violent” web site has allegedly helped several known violent regimes silence free speech in large areas of the planet.

We will consult with our legal counsel about this blatant miscategorization of Infowars.com and encourage everyone to stand up against this electronic blockade.

“If we do not hang together, we shall surely hang separately,” as Benjamin Franklin so eloquently stated.