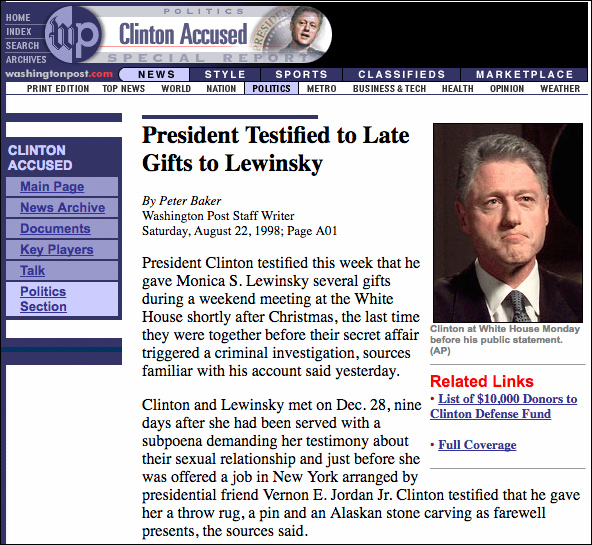 Weinstein’s name appears among a slew of liberal Hollywood donors who came to Clinton’s aid as he mounted a legal defense against Jones’ civil lawsuit, which claimed the disgraced commander-in-chief sexually harassed and exposed himself to her.

The August 1998 article claims over 17,000 donors helped raise $2.2 million in a six month span to help with Clinton’s legal fees in matters regarding the Jones lawsuit, the Whitewater controversy, the Lewinsky investigation and more.

Hollywood was quick to come to the president’s aid. Among the 62 donors giving the maximum $10,000 were performers and directors such as Tom Hanks, Barbra Streisand, Michael Douglas, Ron Howard, Norman Lear, Steven Spielberg and Kate Capshaw-Spielberg as well as studio executives Jeffrey Katzenberg, David Geffen, Harvey Weinstein and Bud Yorkin.

Jones would eventually receive a settlement payout of $850,000.

The article is being revisited in the wake of allegations against Weinstein, who has been accused by numerous women of abusing his power to request sexual favors in exchange for movie roles.

Renewed interest in the Post’s article also comes as The Clinton Foundation says it will not be returning $250,000 donated by Weinstein, instead claiming the money has already been spent on charity.