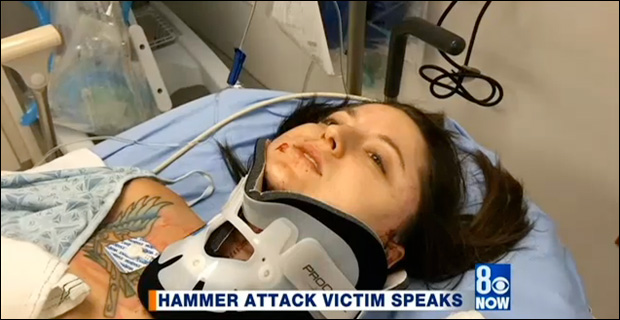 Some are questioning whether a series of hammer attacks which took place near Las Vegas last Friday were motivated by racial factors, a distinction which would add it to the growing list of black on white crimes garnering little to no attention in the mainstream press.

Las Vegas resident Damien Robins, 31, faces six attempted murder charges and one count of assault with a deadly weapon after he launched a series of random assaults last Friday on drivers in Boulder City, carrying out multiple sledgehammer attacks on nearly 10 people within the course of an hour.

[Henderson Police Department spokesperson Keith] Paul said the incident started in Boulder City around 8 p.m. Friday when Robins is accused of attacking a woman in a car with a one-handed sledgehammer in a convenience store parking lot. He then attacked two elderly people in the parking lot of a Boulder City auto parts store, according to Paul.

Attack victim Nicole Thompson (pictured below) told CBS affiliate 8 News Now she pleaded for her life as Robins smashed out her windows and proceeded to hit her in the head.

“He was just crazed,” she said. “I don’t know, he was just going and just hitting me.”

While police are still reportedly seeking a motive, one plausible explanation is that the attacks were motivated by race.

As we have witnessed in the past, the corporate media routinely underreports crimes perpetrated by black citizens in which the victim is white, while on the other hand, white on black crimes are magnified in order to promote the theory that blacks face a growing hate crimes threat from whites, serving to further incite racial tensions.

Last year following the acquittal of Trayvon Martin murder suspect George Zimmerman, we documented a rash of unprovoked black on white attacks which received little to no mainstream media attention aside from sites like WND, Drudge Report and Infowars. 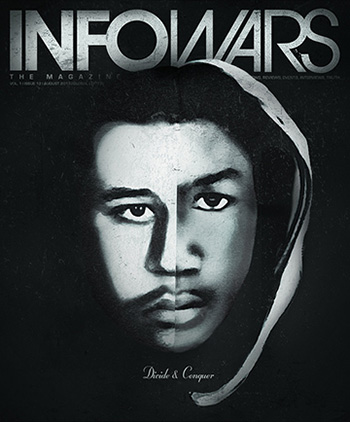 We reported on accusations leveled against the Jacksonville Sheriff’s Office in July 2013 claiming it helped cover up the hate crime murder of two white brothers who were possibly attacked due to a bumper sticker on their truck that read “Free Zimmerman.”

We also reported on the beating of a white conservative journalist and filmmaker who said he was approached repeatedly by protestors demanding he stop filming. The journalist said he was surrounded by an angry mob and attacked by an interminable number of people before he was able to fend them off.

Even before Zimmerman’s case went to trial, we documented a spate of violent incidents that were conducted in the name of “Justice for Trayvon.”

In April 2012, Matthew Owens was seriously injured in Mobile, Alabama, after “about 20 African American adults beat Owens — who is white — into a bloody pulp with brass knuckles, pipes and even paint cans,” according to the Huffington Post. “Now that’s justice for Trayvon,” said one of the assailants.

Also in 2012, the Toledo Blade reported that a 78 year old man was attacked by a gang of thugs. “While Mr. Watts was down the boys kicked him, over and over, shouting, ‘[Get] that white [man]. This is for Trayvon … Trayvon lives, white [man]. Kill that white [man],’ according to a police report,” the newspaper reported.

The media’s latest racial exploitation revolves around the August 2014 police shooting death of Ferguson, Missouri teen Michael Brown, where the press’s slanted coverage has driven protesters into a frenzy, with some issuing calls to launch unprovoked attacks on white people, despite evidence emerging which suggests the cop who shot the teen may have been justified in doing so.