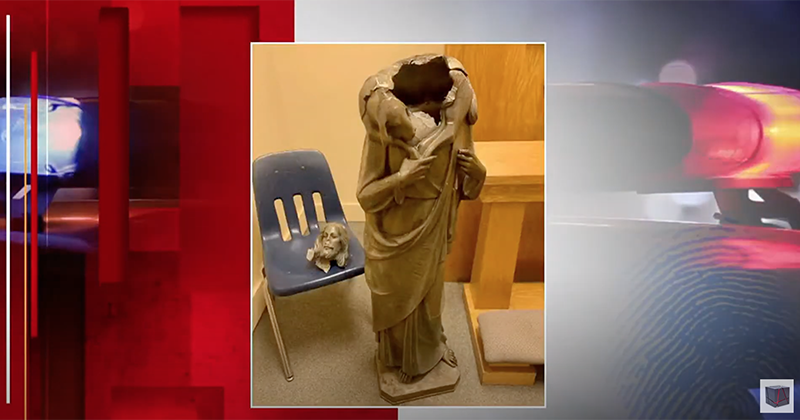 A statue of Jesus has been left headless in the courtyard of a Catholic church in Kendale Lakes, Florida, after allegedly being vandalized. The Miami Archdiocese says it expects police to pursue the incident as a hate crime.

The statue of Jesus Christ as the Good Shepherd had been resting behind the church for decades before meeting its end, allegedly decapitated by vandals overnight into Wednesday.

It’s unclear who was behind the act, with church staff saying they found the statue early on Wednesday morning with its head already separated from its body, lying nearby on the ground.

Although the church is equipped with security cameras, Deacon Edivaldo da Silva told local media that CCTV footage would hardly be helpful to identify those responsible, as none of the cameras show the damaged statue.

Still, the Archdiocese of Miami believes the circumstances of the case point to foul play, rather than to an unfortunate accident.

“This is not something you can trip over and say, ‘Oh, sorry,’ – Someone did this intentionally,” spokesperson Mary Ross Agosta told local media.

Agosta said the church sees it as not merely an act of vandalism – which has been on the rise in the wake of the George Floyd protests, with activists toppling statues of historical figures across the country – but an “an attack on the church” that should be investigated as a “hate crime.”

The archdiocese noted that the suspected hate-fueled attack on the statue is not an isolated incident, and that the Catholic Church as a whole has faced an avalanche of similar attacks recently.

This is another attack on the Catholic Church which is happening across the country.


Miami-Dade police have launched a probe into the incident.

Last Saturday, a statue of Mary was set on fire in St. Peter’s Parish Church in Dorchester, Massachusetts, with police saying that suspects ignited the plastic flowers the statue was holding.

On July 10, a 100-year-old statue of the Blessed Virgin Mary at the entrance of Cathedral Preparatory School and Seminary in New York was spray painted with the word ‘IDOL’. The NYPD are investigating the incident as criminal mischief.

The ongoing spree of vandalism has swept the country amidst a wave of Black Lives Matter protests, which kicked off in May, triggered by the killing of an unarmed black man in police custody. While initially aimed at statues of Confederate generals and slave owners, the removal crusade quickly escalated, and saw activists cheering the toppling of Christopher Columbus statues and those of former US presidents.

As the onslaught on historical monuments continued, some of the most radical BLM proponents, such as racial activist Shaun King, suggested that activists set their eyes on “white Jesus” statues, calling them a manifestation of “white supremacy.”

“Yes, I think the statues of the white European they claim is Jesus should also come down,” King tweeted. “They are a form of white supremacy. Always have been.”