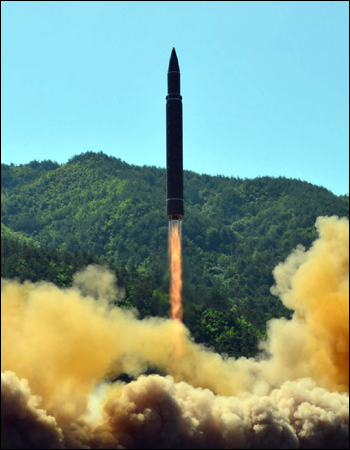 The Hwasong-14 missile, which reached an altitude of 1,700 miles – making it’s range on a standard trajectory up to 4,970 miles – is believed by experts to be capable of reaching Alaska.

The Kim Jong-Un regime’s new long-range capability represents a significant shift as any action by the United States must now factor in the possibility – however unlikely – of North Korean retaliation against U.S. territory. Although analysis suggests the rogue nation has yet to attach a nuclear warhead to an ICBM, such a device could be around the corner as advancements in the country’s weapons program have surpassed outside expectations.

While the calculus and risks related to Pyongyang have changed, the options available to limit the regime’s nuclear strength remain relatively the same: military, economic and diplomatic.

A pre-emptive military strike on North Korea, as recently stated by United States defense secretary Jim Mattis, would likely result in “the worst kind of fighting in most people’s lifetimes.” Not only would a strike fail to destroy North Korea’s dozen or more nuclear weapons, hidden and scattered throughout the country’s mountainous terrain, but would result in a swift and devastating retaliation.

Aside from Pyongyang’s ability to launch medium-range missiles, potentially equipped with a nuclear or even biological payload, at South Korea and Japan – home to millions of civilians and tens of thousands of U.S. military personnel – the regime also has as many as 15,000 artillery cannons and rocket launchers stationed at its border against the South. 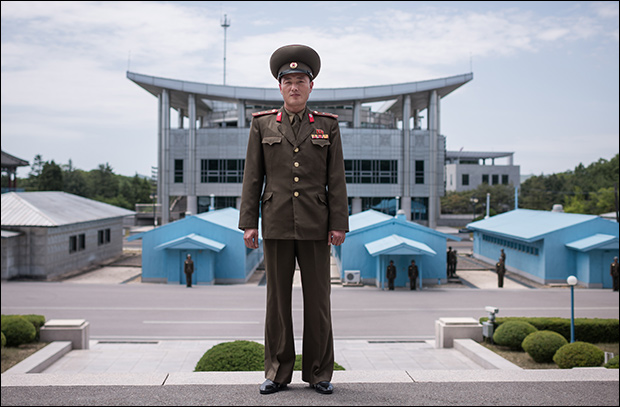 While South Korea could defend from some ballistic missiles with the Terminal High Altitude Area Defense system missile shield, smaller artillery would undoubtedly reach highly populated areas such as the capital of Seoul.

The North Koreans, Admiral Harold B. Harris, commander of U.S. Pacific Command, told the Senate Armed Services Committee in 2016, “pose a threat today, with their hundreds of thousands of rockets within rocket range of Seoul, to the 28,500 American troops that are posted there, their families, the hundreds of thousands of Americans who work in Korea, and our Korean ally and Japan.”

The Trump administration’s economic options include moving forward with further sanctions on China, North Korea’s main supplier of fuel and food. Although Chinese President Xi Jinping has taken some action as of late, the leader is unlikely to place the amount of pressure on its southern neighbor as desired by Trump. 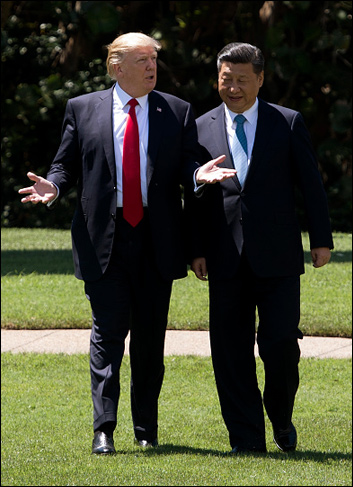 Though Xi Jinping likely sees North Korea’s escalatory actions as distressing, China fears a unified Korea – which would place a U.S. ally on its border – more than it fears a nuclear-armed Kim regime. Heavy-handed action by China could also result in the collapse of the hermit kingdom, producing a wave of North Korean migrants overwhelming the Chinese border.

“The fall of the Soviet Union meant that China got North Korea all to itself, and it has continued to support Pyongyang for two reasons: To Beijing, the alternative of a united Korean peninsula that is a staunch U.S. ally, allowing Washington to station troops at the Chinese border, would be a defense catastrophe,” wrote Time’s Charlie Campbell last year. “Secondly, the collapse of the Kim regime would send an alarming flood of millions of refugees across the shared frontier.”

A diplomatic solution for the Trump team would likely have to appease both North Korea as well as China without losing the United States’ military footing in the Korean peninsula. Although North Korea is unlikely to give up its pursuit of nuclear weaponry – seeing it as its only tool to defend from regime change – Pyongyang may agree to pausing its nuclear weapons program and missile tests in exchange for limits on US and South Korean military drills among other concessions. In turn, the United States and China could lift certain sanctions and allow the flow of much-needed goods back into the country.

South Korean President Moon Jae-in signaled Thursday his willingness to open a dialogue with Kim Jong-Un if the conditions are right.

“When the right conditions are fostered and when there is a chance to reverse the current tension and situation of confrontation on the Korean Peninsula, I am ready to meet with North Korean leader Kim Jong Un at any time and any place,” Moon said.

Ultimately, North Korea could renege on any deal and continue its weapons programs in secret. Nikki Haley, the U.S. ambassador to the United Nations, has also warned Pyongyang that the window for diplomatic solutions could be closing.

“Their actions are quickly closing off the possibility of a diplomatic solution,” she said during a recent emergency meeting with the Security Council.

The Trump administration is now faced with limited and risky options as North Korea moves closer to it nuclear goals.