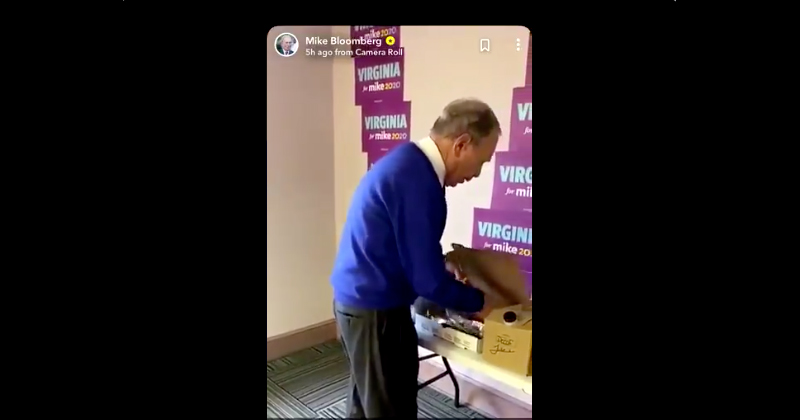 Michael Bloomberg is apparently unfazed by the Coronavirus after he ripped the crust off of a pizza, then threw the crust back in the box.

Bloomberg, who was campaigning in Virginia ahead of Super Tuesday, is seen licking his fingers before shoving them back into the pizza box meant for others.

“When in doubt, rip off the crust,” reads the video description, which was presumably uploaded to Snapchat by his campaign staff.

He’s also seen touching the community coffee dispensers after he licked his fingers.

“And he goes on TV to claim HE IS THE ONE TO LEAD US THROUGH THE CORONA VIRUS pandemic. Hysterical,” one commenter stated.

As mentioned, Bloomberg has blasted President Trump’s response to the ongoing Coronavirus crisis, claiming he was “incapable of confronting” the problem.

“The public wants to know their leader is trained, informed and respected,” he said. “When a problem arises, they want someone in charge who can marshal facts and expertise to confront the problem.”

That’s apparently at odds with his food-handling safety, others suggested.