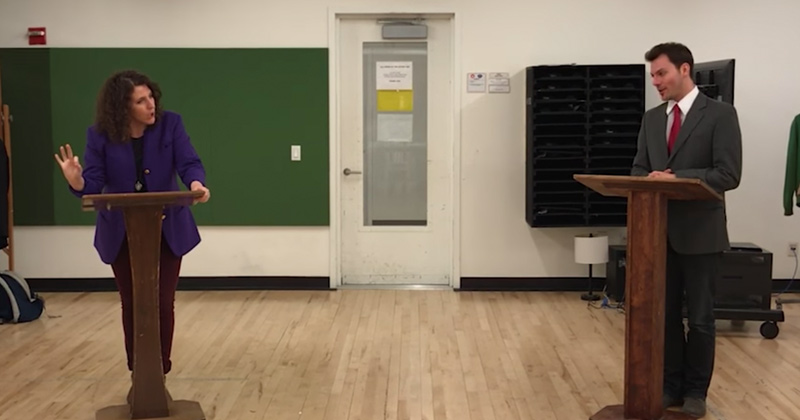 After watching the second televised debate between Donald Trump and Hillary Clinton in October 2016—a battle between the first female candidate nominated by a major party and an opponent who’d just been caught on tape bragging about sexually assaulting women—Maria Guadalupe, an associate professor of economics and political science at INSEAD, had an idea. Millions had tuned in to watch a man face off against a woman for the first set of co-ed presidential debates in American history. But how would their perceptions change, she wondered, if the genders of the candidates were switched? She pictured an actress playing Trump, replicating his words, gestures, body language, and tone verbatim, while an actor took on Clinton’s role in the same way. What would the experiment reveal about male and female communication styles, and the differing standards by which we unconsciously judge them?

Guadalupe reached out to Joe Salvatore, a Steinhardt clinical associate professor of educational theatre who specializes in ethnodrama—a method of adapting interviews, field notes, journal entries, and other print and media artifacts into a script to be performed as a play. Together, they developed Her Opponent, a production featuring actors performing excerpts from each of the three debates exactly as they happened—but with the genders switched. Salvatore cast fellow educational theatre faculty Rachel Whorton to play “Brenda King,” a female version of Trump, and Daryl Embry to play “Jonathan Gordon,” a male version of Hillary Clinton, and coached them as they learned the candidates’ words and gestures. A third actor, Andy Wagner, would play the moderator in all three debates, with the performances livestreamed. Andrew Freiband, a professor in the Department of Film/Animation/Video at the Rhode Island School of Design, provided the video design. (Watch footage from a Her Opponent rehearsal below.)

Salvatore says he and Guadalupe began the project assuming that the gender inversion would confirm what they’d each suspected watching the real-life debates: that Trump’s aggression—his tendency to interrupt and attack—would never be tolerated in a woman, and that Clinton’s competence and preparedness would seem even more convincing coming from a man.

But the lessons about gender that emerged in rehearsal turned out to be much less tidy. What was Jonathan Gordon smiling about all the time? And didn’t he seem a little stiff, tethered to rehearsed statements at the podium, while Brenda King, plainspoken and confident, freely roamed the stage? Which one would audiences find more likeable?

The two sold-out performances of Her Opponent took place on the night of Saturday, January 28, just a week after President Trump’s inauguration and the ensuing Women’s March on Washington. “The atmosphere among the standing-room-only crowd, which appeared mostly drawn from academic circles, was convivial, but also a little anxious,” Alexis Soloski, a New York Times reporter who attended the first performance, observed. “Most of the people there had watched the debates assuming that Ms. Clinton couldn’t lose. This time they watched trying to figure out how Mr. Trump could have won.”

Inside the evening’s program were two surveys for each audience member to fill out—one for before the show, with questions about their impressions of the real-life Trump–Clinton debates, and another for afterward, asking about their reactions to the King–Gordon restaging. Each performance was also followed by a discussion, with Salvatore bringing a microphone around to those eager to comment on what they had seen.

“I’ve never had an audience be so articulate about something so immediately after the performance,” Salvatore says of the cathartic discussions. “For me, watching people watch it was so informative. People across the board were surprised that their expectations about what they were going to experience were upended.”

Many were shocked to find that they couldn’t seem to find in Jonathan Gordon what they had admired in Hillary Clinton—or that Brenda King’s clever tactics seemed to shine in moments where they’d remembered Donald Trump flailing or lashing out. For those Clinton voters trying to make sense of the loss, it was by turns bewildering and instructive, raising as many questions about gender performance and effects of sexism as it answered.

And this was just the first phase of the project: Her Opponent’s creators envision adapting the recording as a classroom teaching tool to explore the complex ways our personal biases influence how we receive messages. The gender-swapping technique, Salvatore suggests, could also be used to explore the communication styles of different political figures in other charged confrontations.

NYU News talked with Salvatore about the painstaking process of re-gendering the presidential candidates, and about why the Gordon–King debates seem to have struck a nerve.

How were the excerpts chosen?
Maria Guadalupe chose them. The excerpts covered a variety of different issues, and they also had to be possible to do in the gender inversion. For example, we talked about doing a section at the top of debate two, where Trump had paraded out three women who had accused Bill Clinton [of sexual assault], because there were some interesting things going on with gender there. But when Maria listened to it, she anticipated that trying to do the inversion would become really complicated. There was another moment in that same debate where Clinton says, “When I was First Lady, I had to work with Democrats and Republicans,” and we ended up having to cut the “When I was First Lady” because when we tried it as “When I was First Man,” it just made no sense. The other thing is that the sections she chose featured both solo speaking and cross-talk. We felt like that was an important element because Trump’s aggression—the way he uses the microphone—is present in the cross-talk and not as much in the other sections.

What was the rehearsal process like?
It was really challenging on a number of levels—technically, but mentally and emotionally as well. Especially for Rachel, who played the female version of Trump, it was emotionally challenging because of the things she had to say. We started with audio first, so that the actors could listen to it and learn it without the visuals. Then we went back into the room with screens to watch, and they took notes on the gestures to link to the audio that they had already learned.

At some point they were able to do it from memory with the video of Trump and Clinton playing along behind them on a TV, so their level of accuracy was pretty amazing. Once we got into rehearsal and started experiencing Clinton in a man’s voice and body, Maria and I started to think that maybe Daryl had the harder job. We both thought that the inversion would confirm our liberal assumption—that no one would have accepted Trump’s behavior from a woman, and that the male Clinton would seem like the much stronger candidate. But we kept checking in with each other and realized that this disruption—a major change in perception—was happening. I had an unsettled feeling the whole way through.

Based on the conversations after the performances, it sounded like audience members had their beliefs rattled in a similar way. What were some themes that emerged from their responses?
We heard a lot of “now I understand how this happened”—meaning how Trump won the election. People got upset. There was a guy two rows in front of me who was literally holding his head in his hands, and the person with him was rubbing his back. The simplicity of Trump’s message became easier for people to hear when it was coming from a woman—that was a theme. One person said, “I’m just so struck by how precise Trump’s technique is.” Another—a musical theater composer, actually—said that Trump created “hummable lyrics,” while Clinton talked a lot, and everything she was was true and factual, but there was no “hook” to it. Another theme was about not liking either candidate—you know, “I wouldn’t vote for either one.” Someone said that Jonathan Gordon [the male Hillary Clinton] was “really punchable” because of all the smiling. And a lot of people were just very surprised by the way it upended their expectations about what they thought they would feel or experience. There was someone who described Brenda King [the female Donald Trump] as his Jewish aunt who would take care of him, even though he might not like his aunt. Someone else described her as the middle school principal who you don’t like, but you know is doing good things for you.

What did you find most surprising?
I was particularly struck by the post-performance discussions about effeminacy. People felt that the male version of Clinton was feminine, and that that was bad. As a gay man who worked really hard, especially when I was younger, to erase femininity from my body—for better or worse—I found myself feeling really upset hearing those things. Daryl [the actor playing Jonathan Gordon, the male Clinton] and I have talked about this multiple times since the performances. Never once in rehearsal did we say, “play this more feminine.” So I think it was mostly the smiling piece—so many women have told me that they’re taught to smile through things that are uncomfortable. It’s been really powerful to hear women talk about that, and a learning experience for me. I was surprised by how critical I was seeing [Clinton] on a man’s body, and also by the fact that I didn’t find Trump’s behavior on a woman to be off-putting. I remember turning to Maria at one point in the rehearsals and saying, “I kind of want to have a beer with her!” The majority of my extended family voted for Trump. In some ways, I developed empathy for people who voted for him by doing this project, which is not what I was expecting. I expected it to make me more angry at them, but it gave me an understanding of what they might have heard or experienced when he spoke.

What’s next for this project?
The plan is to go into a studio and film these debate excerpts, shot for shot, as they were televised on TV. My colleague Andrew Freiband from the Rhode Island School of Design is especially interested in non-verbal cues—all the unconscious information that gets thrown at us based on physicality, tone of voice, and gestures, but also camera angles, shot length, and the size of the lens. He’s hoping that out of the film version we can create an interface online where a person will be able to click on both the original debate and our version of it, with an annotated description running underneath. That way we can start to get at how all of these nonverbal elements, which are undetectable in real time, contribute to the message that we receive when we watch these things. This has really emerged for us as a tool that could be quite powerful, and I would love for people beyond the liberal, academic audience to get to experience it too.