All of a sudden, the Nasdaq is absolutely tanking.  On Monday, it fell more than 1 percent after dropping 3.6 percent on Thursday and Friday combined.  At this point, the Nasdaq is off to the worst start to a year that we have seen since 2008, and we all remember what happened back then.

So why is this happening?  In recent years, the Nasdaq has been ground zero for “dotcom bubble 2.0”.  The hottest stocks in the entire world are on the Nasdaq – we are talking about stocks like Yahoo, Netflix, Apple, Tesla, Google and Facebook.  Those stocks have gone to absolutely incredible heights, but now they are starting to fall.  Some are blaming insider selling, and without a doubt the “smart money” is starting to flee the stock market.  Just check out this chart.  Others are blaming low expectations for first-quarter earnings or the tapering of quantitative easing by the Federal Reserve.  But whatever is causing this decline, it is starting to get alarming.  The Nasdaq just experienced its largest three day fall since November 2011.

No stock can resist gravity forever.  What goes up must eventually come down.  This is especially true for stock prices that become grotesquely distorted.

On Wall Street, a price to earnings ratio of 20 to 25 is usually considered fairly normal.  In recent years, the price to earnings ratios for many of these “hot tech stocks” have gone way, way beyond that.  For example, posted below is a screen capture from Bloomberg TV that was featured in a recent Zero Hedge article… 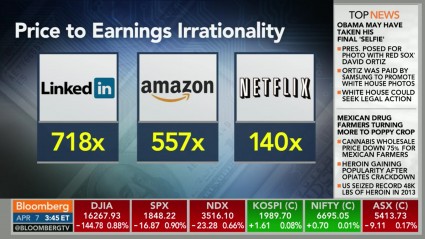 There is no way in the world that such valuations are justified.

We have been living in another dotcom bubble, and it was inevitable that it was going to burst at some point.

Gary Kaltbaum, president of money-management firm Kaltbaum Capital Management, describes the carnage of once high-flying “growth” names in the Nasdaq composite, that have come crashing down to earth: “The best we can describe what we have been recently seeing in ‘growth-land’ is a 50-car pileup,” Kaltbaum told clients in a morning research note. “Call them what you want … risk areas, growth stocks, froth areas … they are melting away.“

And of course it isn’t just the Nasdaq that has been seeing declines over the past few days.  On Monday, some of the biggest names on the Dow also fell precipitiously…

Visa, Goldman Sachs and Boeing are among the biggest drags on the Dow Monday, falling 2.1%, 2.9% and 1.4% respectively. Weakness in these stocks is especially problematic since the Dow gives greatest weight to the stocks with the highest per-share prices. And at $203.41, $158.56 and $125.59 respectively, Visa, Goldman and Boeing are the stocks that really matter to the measure.

This recent decline has many analysts groping for answers.

Some believe that it is simply a “rotation” as investors leave growth stocks that have become overvalued and move into safer, more traditional stocks.

Others are pointing their fingers at the Federal Reserve…

Peter Boockvar, chief market strategist at Lindsey Group, believes it’s all about the Fed. “I’m still amazed at the complacency with the Fed taper, and a lot of people still don’t think it’s a big deal,” he said. “I just don’t think it’s a coincidence that the high-fliers are getting popped when the Fed is half way done with QE. We’ve got tightening smack in front of your face with the taper.”

In fact, some believe that the really big stock market decline will happen later this year when the Fed starts to wrap up quantitative easing completely…

Once the Fed begins to truly reduce its massive bond buying program later this year, markets could see a quarter of their value wiped off the books, a private equity pro told CNBC on Friday.

Jay Jordan, founder of the Jordan Company, issued the dire warning during an interview on CNBC’s “Squawk Box,” saying a 25 percent drop could extend to all asset classes. He blames the monetary policies of former Fed chair Ben Bernanke for artificially inflating asset prices through super-low interest rates.

Yet others point to the fact that we are now moving into earnings season, and it is being projected that corporate earnings will come in at very poor levels.  In fact, it is being estimated that overall earnings for companies in the S&P 500 for the first quarter will be down 1.2 percent.

So what should we expect to see next?

Whether it happens this month or not, at some point a massive stock market correction is coming.  In recent years, the financial markets have become completely and totally divorced from economic reality, and that is a state of affairs that cannot last indefinitely.

Many have compared the current state of affairs to 2008, but to me what is happening right now is eerily reminiscent of 2007.  The Dow soared to record heights quite a few times that year, but there were constant rumblings of economic trouble in the background.  Stocks began to drop steadily late in the year, and 2008 ultimately turned out to be an utter bloodbath.

I believe that what is happening right now is setting the stage for another financial bloodbath.  I truly believe that we will look back on this two year time period and regard it as a major “turning point” for America.

And as I have written about previously, we are in far worse shape as a nation than we were back in 2008.  We have far more debt, the “too big to fail banks” have a much larger share of the banking industry, the derivatives bubble has gotten completely and totally out of control, and our overall economy is far weaker than it was back then.

In other words, we are now even more vulnerable.  When the next great financial crisis strikes us, it is going to be absolutely crippling.

Now is not the time to get complacent.

Now is the time to get prepared, because time is running out. 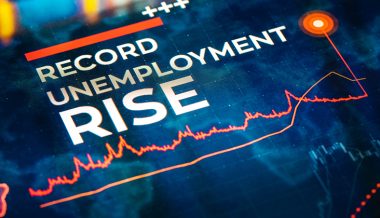