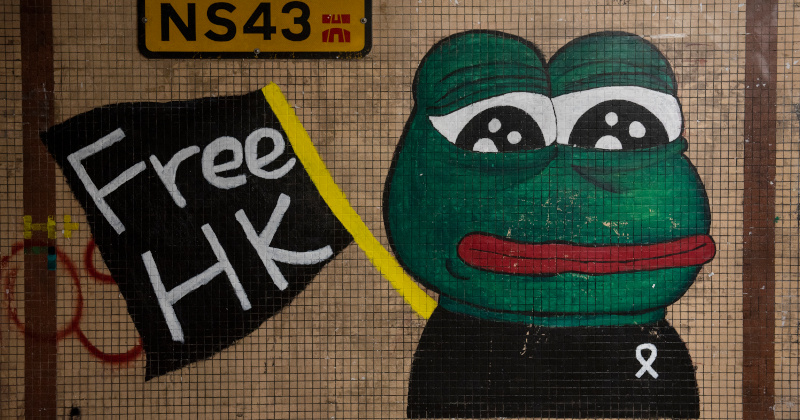 Having written hundreds of articles demonizing the amphibian meme as inherently sinister, news outlets have had to perform a quick 180 now that he has been adopted as the mascot of the Hong Kong protest movement.

Pepe the Frog has been everywhere during the past six months of anti-government demonstrations in the Chinese city – as a flash graffiti drawn on and washed off walls, a doll holding placards with political slogans and calling for political changes from custom-made t-shirts, in user-made pictures and cartoons circulated on social media and in organizers’ WhatsApp and Telegram groups.

For the Western media slavishly dedicated to covering the demonstrations from the protesters’ perspective, this has been awkward, yet impossible to ignore.

Is this not the same Pepe whose alternately self-satisfied and downbeat visage was used as a vehicle for alt-right talking points prior to the 2016 election? The one that candidate Hillary Clinton dedicated a special warning to on her website, saying he had been “almost entirely co-opted by white supremacists”? The one that the Anti-Defamation League still considers a hate symbol even in its unaltered form?

The simplest route has been to wave this away as a coincidence, with almost every mainstream media article at pains to emphasize that the Hong Kong protesters are not alt-right, and were entirely unaware of the connotations of the cartoon frog, which do not apply outside the US.

More sophisticated explanations have celebrated “reclaiming” Pepe, recalling that he had begun his life as a stoner joke for a minutiae-obsessed apolitical web cartoon by artist Matt Furie back in 2005, three years before “alt-right” was even a word.

All that might be correct if not for the glaring similarities between how Pepe was used three years ago and now that make it hard to believe that the current green frog had no lineage.

In both cases the cartoon gave a chance for protest movements to challenge the establishment through his sly subversion. Is Pepe trolling you or is he being serious? When he cries is that just a cheap joke, or a comment about grave imbalances of power?

Using him as a truth-sayer figure couched in levels of irony, disarms, gives plausible deniability, and most of all, reflects the young, media-savvy culture that permeates both the Hong Kong movement squaring up to the might of Beijing, and the 4Chan provocateurs who helped Donald Trump get elected against the prevailing cultural winds.

After all the slogan of the Hong Kong crowds is a Bruce Lee quote: “be water.” Once again, it plays up the amorphousness and flexibility, the anonymity and persistence of the crowd, whether mass-posting online or occupying a public space, trying to shake up the monolithic structures of the ruling elite.

These biases can be seen through the contrasting coverage of say – the Yellow Vests and Black Lives Matters or the Maidan protests, but here is a rare test case.

Certainly, the protesters in Hong Kong aren’t drawing up Hitler mustaches on their Pepes, or making them gloat outside of gas chambers. But frankly, neither did most of the images that circulated through the image boards and continue to crop up in Twitter discussions today.

The vilification was largely intellectually dishonest, and relied on picking unrepresentative examples to marginalize what is already a minority hidden on the outskirts of polite internet discourse.

It was also ineffective. Just as Pepe did not die, but returned through ever more postmodernist reincarnations, including the anarchic and popular Clown Pepe who comments on the absurdities of political correctness or the latest big tech censorship, and now again, half-a-world away.

There is a lesson here: you can call Pepe far-right, and equate the OK gesture to “Heil Hitler!”

But if any dissenters remain, and you are suppressing their ideas, not debating them, the internet will find a way. And for all your billions, armies, and news channels you will be the ones forced to spend your time mass-deleting pictures of memes off the internet to keep your grasp on power.

Alex Jones breaks down how the Chinese government is actively censoring American systems.