Oh, you want more? Groucho Marx used to tell a joke on himself that “I wouldn’t want to belong to any club that would admit me as a member.” That pretty much sums up why we shouldn’t expect much from the new chairman of the Federal Reserve System. This administration and this Congress will never admit anyone that is not of the Keynesian-School-of-economics persuasion. As long as this mentality resides in the political halls of power, our nation will not get another Paul Volcker.

That means that we should anticipate a continuation of policies that assume that monetary expansion can spur economic growth. It cannot. Monetary expansion can spur phony economic growth; i.e., fooling entrepreneurs to invest capital in projects that will not return a profit. GDP may go up — temporarily. Employment may go up — temporarily. Janet Yellen and her fellow Keynesians believe that the Fed, through money creation, can create software engineers, doctors, nurses, and steel mills. In other words, they think they’re creating real resources. It’s nonsense, yet they seem to be true believers. They may couch this error in highfalutin terms, but that is what they mean on a fundamental level. In the end capital will be destroyed, resulting in an economic bust, and the nation will have wasted years and resources that it can never recover. 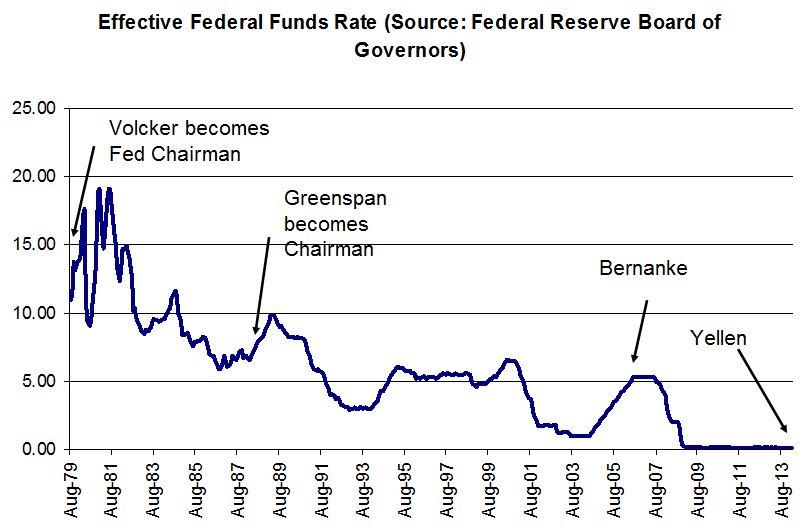 Now, Yellen may preside over a gradual “tapering” of the unprecedented “quantitative easing” program begun under Bernanke. But this does not mean that she is different. Remember, that program was unprecedented; everyone knew at its beginning that it could not continue forever. Whoever occupies the Fed chairmanship would have to end that program at some point — we hope. There is no guarantee, however. If rates start to rise, unemployment rises, and businesses start to go bust, the Fed could jump right back into the program, because that is all it knows how to do — print money. The real question is whether Yellen and her fellow travelers will accept a recession that most likely will occur as QE ends. The Fed likes to think of QE as a jump start, a one-time boost, a helping hand, etc. But these are false analogies. QE funds projects that cannot exist in its absence; therefore, when QE ends or even slows down, these projects will be revealed to be unprofitable. No amount of cost cutting will make them profitable. They were born of QE and they will die when QE ends. The only question is whether the Fed will accept the necessary recession or will jump right back into money printing. If it does the latter, we can expect an even greater bust in the future.

The Fed has painted itself into a corner. There is no way that the nation can avoid either a recession or the collapse of the value of the dollar. We should prefer the recession, then insist on an end to monetary expansion, regardless of the howls from the politicians that the government cannot continue its many programs otherwise. At the core this is a political problem. Only a radical change in the mindset of government can end the monetary madness.