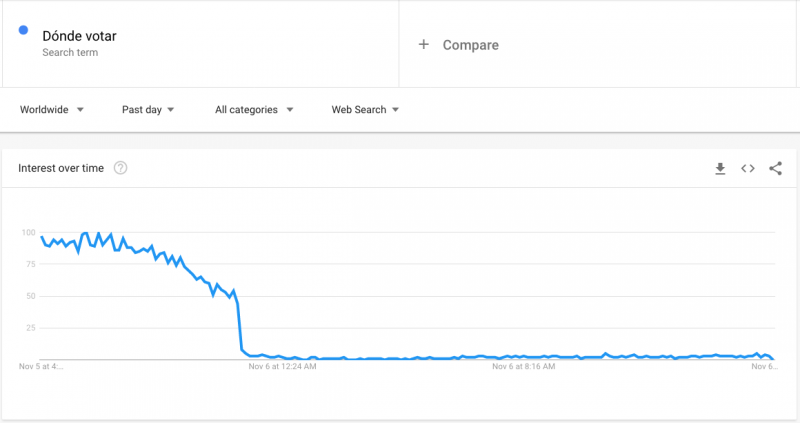 “Dónde votar” – Spanish for “where to vote?” – was the top trending US search on Google right before midterm elections, according to a company source.

Additionally, the same source said the “dónde votar” surge happened Monday night but flat-lined the next morning when most Americans headed to the polls.

It’s also worth noting that while “dónde votar” search term was top trending, overall its English equivalent “where to vote” was searched far more often on Monday.

Undecided voters are also asking Google who they should vote for. Gee, what could go wrong there?

“Some of the trending questions don’t focus on logistics. As of this writing, ‘who to vote for today,’ ‘what are we voting for today,’ and ‘what do midterm elections do?’ are among the less, uh, encouraging Google trends,” reported The Week.

Of course, undecided voters won’t get an unbiased opinion from Big Tech.

As Paul Joseph Watson reported on Nov. 1, Google was being accused of burying the ‘Blexit’ political movement that encouraged African-Americans to leave the Democratic Party.

“The sheer scale of the manipulation is realized when one searches for ‘Blexit’ on other major search engines, including DuckDuckGo, Yahoo and Bing,” he wrote. “In every instance, the correct result, Candace Owens’ official ‘Blexit’ website, appears as the number one ranked search result.”