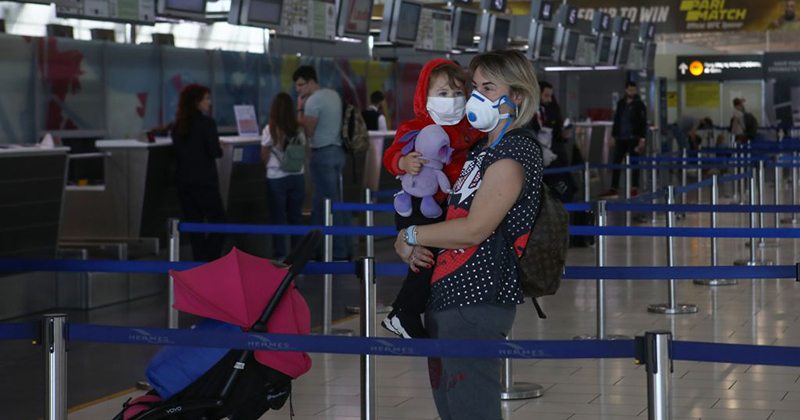 Is the United States on the verge of a complete and total “lockdown” like we have already seen in China, Italy and elsewhere?

As you will see below, the Trump administration has repeatedly brought up the possibility of “domestic travel restrictions”, and that means that this is something that is very seriously being considered.

The first step may be simply banning all non-essential domestic air travel, and that would be a major inconvenience for many Americans.

But beyond that, there is the possibility that we could see restrictions on all travel between states or even draconian restrictions on going out in public at all like we have already seen in China and Italy.

If we get to that point, where you are at that moment is where you will be staying, and I will be sharing more about this below.

But first, let’s review what the Trump administration has been telling the public about the possibility of “domestic travel restrictions”.  The following comes from a USA Today article that was posted on Saturday…

They did not offer specifics on domestic flight restrictions but Trump said earlier in the week that they would be considered if “an area gets a little bit out of control” in terms of coronavirus cases.

I think that the phrase “is considering domestic travel restrictions” is pretty clear, and it should definitely send a chill up your spine.

Then on Sunday, a member of the administration said that officials are weighing “an outright halt to domestic air travel”…

The Trump administration is weighing “all options” to curb the coronavirus outbreak in the U.S., including an outright halt to domestic air travel, a senior official said Sunday.

Such a drastic step hasn’t been taken since the Sept. 11, 2001 attacks, and it would raise questions about U.S. airlines’ chances for survival without government support.

This came directly from acting secretary of the Department of Homeland Security Chad Wolf, and he went on to add that “all options remain on the table”…

“We continue to look at all options and all options remain on the table,” said Chad Wolf, acting secretary of the Department of Homeland Security in a press briefing when asked about the possibility. He said the administration is following guidance from the Centers for Disease Control and Prevention.

So would “all options” also include banning all travel in and out of states where this pandemic is the worst?

Apparently so, and this is something that Florida Governor Ron DeSantis is actually asking for…

Florida Gov. Ron DeSantis said the White House should consider restricting domestic travel from states that are seeing a rapid increase in coronavirus infections, saying the flow of people has made containment difficult.

He made the plea shortly before the state on Saturday announced its fourth death from the disease, a 77-year-old man from Lee County.

Could you imagine getting into your car and driving toward the next state only to be stopped at the border?

It could soon happen.

Hopefully we won’t get to that point, but this outbreak continues to spiral out of control.

And if the numbers just keep going up, it is inevitable that we will see things happen that would have been unthinkable only a few weeks ago.

At this point, even Dr. Anthony Fauci appears to be advocating some sort of a “national lockdown”…

Asked by CNN’s Brianna Keilar on “State of the Union” if he’d like a “national lockdown” where people are being told they need to stay home and out of restaurants and bars, Dr. Anthony Fauci, the director of the National Institute of Allergy and Infectious Disease, said he’d “like to see a dramatic diminution of the personal interaction that we see” in those places.

“Whatever it takes to do that, that’s what I’d like to see,” Fauci added.

As Americans, we don’t like to have our movements restricted.

And hopefully the Trump administration will choose not to go in that direction, but they have already restricted domestic travel for members of the military…

A memo released Friday evening announced a ban on government-funded domestic travel for military members, Department of Defense civilians and their families, according to Stars and Stripes.

And similar restrictions have been put into place for federal workers…

As the coronavirus outbreak continues across the U.S., the White House has told federal agencies and executive departments to suspend all work travel unless it is absolutely necessary.

The White House Office of Management and Budget issued new guidance on Saturday telling federal workers that “only mission-critical travel is recommended at this time.”

With all that in mind, I would like for you to watch this video.  According to John Grimm, a Republican candidate for Kootenai County Sheriff, it appears quite likely that we could potentially see some sort of travel restrictions in the near future.  And if there is eventually some sort of a total lockdown, he is warning that “where you stop is where you stay”…

So I hope that you are already at the place where you plan to ride out this pandemic.

If not, I would get there as quickly as possible.

Meanwhile, we continue to see major institutions shut down all over the country.

On Sunday, we learned that all schools in New York City will be shutting down “until at least April 20”…

In a decision he described as “extraordinarily painful,” New York Mayor Bill de Blasio said Sunday that he is closing the city’s public schools on Monday until at least April 20.

The mayor said the city would make every attempt to reopen schools at that point, but that it’s possible schools could remain closed for the rest of the school year.

Also, several states announced on Sunday that all restaurants and bars will be forced to shut down for the foreseeable future.  Ohio was one of the first to make such an announcement…

Ohio Governor Mike DeWine announced that he will be issuing an order to close all restaurants and bars beginning at 9:00 p.m. Sunday night.

“I’m aware that this will impact many, many good workers,” he said in a tweet. “I can’t tell you how sorry I am, but we will work to mitigate the suffering. It is our goal to get everyone through this.”

Most restaurants in this country are just barely scraping by financially, and many of those that are now being forced to close down may not ever open back up again.

Illinois Gov. JB Pritzker announced Sunday afternoon that all restaurants and bars in Illinois will be closed effective at the end of the business day on Monday, continuing through March 30, due to the coronavirus pandemic.

“I cannot let the gravity of the choices prevent us from taking the actions that the science and the experts say will keep people safe,” Pritzker said.

In areas of the country where this outbreak is already wildly out of control, the restaurants and bars might as well be closed down anyway.  Restaurant traffic in New York City and Seattle is down more than 60 percent, and the more this virus spreads the more people are going to be afraid to go out into public to do anything.

Just a few weeks ago our lives seemed so normal, but now our entire country is steadily shutting down from coast to coast.

And life is not going to return to normal any time soon, because the CDC just issued guidelines calling for the cancellation or the postponement of “any events with 50 or more attendees for the next eight weeks”…

The Centers for Disease Control and Prevention is urging people across the U.S. to cancel or postpone any events with 50 or more attendees for the next eight weeks, the agency said in revised guidance issued Sunday.

The CDC said individuals and organizations should reschedule large events and that gatherings of any size should be reconsidered unless organizers can protect vulnerable populations, ensure proper hand hygiene and social distancing.

In other words, everything that is being shut down right now is going to remain shut down for at least eight weeks.

I cannot even begin to describe how damaging that is going to be to our economy.

And what happens if this pandemic is still raging after eight weeks have passed?

The Spanish Flu pandemic lasted for three entire years.  There is no way that authorities could keep us all locked down for that long.

This pandemic is rapidly becoming a national nightmare, and it appears that our freedoms are about to be restricted in ways that most of us never thought possible.

America is on the verge of being locked down, and for many of us it truly will feel like we have been put in prison.