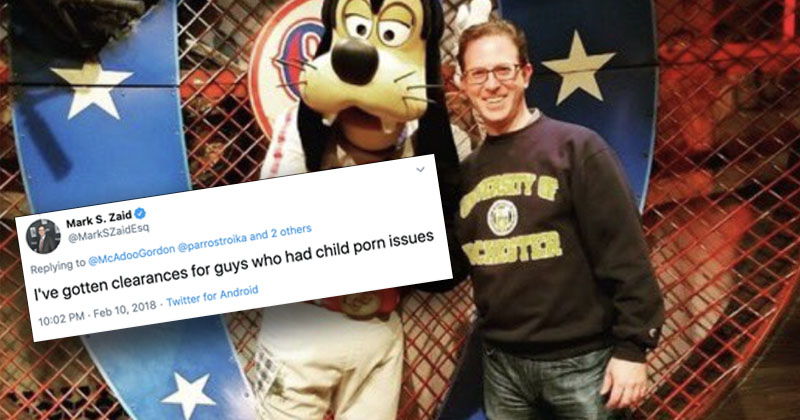 His remark is notable, given Zaid frequently ‘liked’ YouTube videos of young Disney girls, including ones called “Top 10 prettiest disney channel stars” and “Selena Gomez from child to women.”

Zaid also apparently enjoys visiting water parks and Disney World by himself, evidenced by the many photographs documented on social media.

He also once said: “I would have joined FBI just for the free Disney passes.”

Mark S Zaid, the whistleblower’s lawyer, goes to Disney World by himself

Additionally, Zaid claimed being associated with well-known billionaire pedophile Jeffrey Epstein, his client of 25 years, was “probably a good thing” in response to growing media scrutiny over their relationship following Epstein’s suspicious death in prison.

Not sure if being a "little known lawyer" is good thing or bad, although associated with Epstein probably a good thing.https://t.co/lqcYc47cMA

“Many have asked why someone like Mark Zaid would document their solo vacation to Disney World or other such activities and link it to their Facebook profiles,” said Alex Jones. “It appears to be a way of discreetly broadcasting to like-minded clientele and colleagues what sort of circles you may be running with, what kind of things you may be into.”

Watch Jones break it all down below:

Mark Zaid, lawyer to the whistleblower in the impeachment proceedings against Trump, publicly vowed to take down Trump in 2017. Also, he has unusual attention towards child actors.