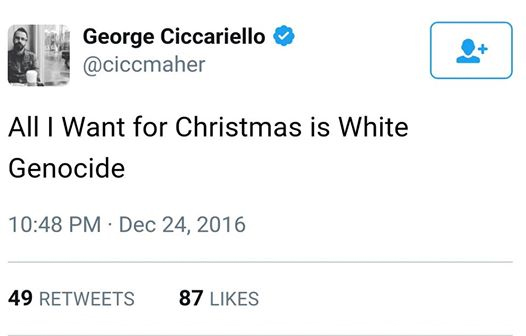 A white communist college professor, who advocated for the genocide of white people in a tweet on Christmas, has a well-documented history of hateful comments towards “crackers.”

George Ciccariello-Maher, an associate professor of political science at Drexel University in Philadelphia, tweeted on Sunday “All I Want for Christmas is White Genocide.”

In addition to his position at Drexel University, he has previously written for The Huffington Post, The Nation, Salon, and the Philadelphia Inquirer.

After a public backlash, the tweet was deleted and his account was subsequently blocked from public view.

“While the University recognizes the right of its faculty to freely express their thoughts and opinions in public debate, Professor Ciccariello-Maher’s comments are utterly reprehensible, deeply disturbing, and do not in any way reflect the values of the University,” Drexel University said in a statement. “The University is taking this situation very seriously.”

“We contacted Ciccariello-Maher today to arrange a meeting to discuss this matter in detail.”

Ciccariello-Maher, a self-described communist who joined Drexel University in 2010, has a well-documented history of anti-white comments on social media despite being white himself.

Also on Sunday, Ciccariello-Maher suggested the massacre of nearly 4,000 white people during the Haitian Revolution in 1804 was a “good thing.”

“Yacub made a lot of white folks,” he tweeted on February 3, 2013. According to the theology espoused by the Nation of Islam, Yacub was a black scientist who created white people as a “race of devils.”

In response to a video, now proven to be a hoax, that appeared to show two men being kicked off a plane for speaking Arabic, Ciccariello-Maher tweeted “#Gulag these Racist Crackers.”

Ciccariello-Maher’s racist comments come after a decision by the University of Wisconsin-Madison to defend its offering of a “Problem of Whiteness” course to incoming students.

The course, taught by Professor Damon Sajnani, is part of the university’s African Cultural Studies program.

“Have you ever wondered what it really means to be white? If you’re like most people, the answer is probably ‘no.’ But here is your chance!,” the course description reads.

Wisconsin Representative Dave Murphy, chairman of the Assembly Committee on Colleges and Universities, has called on the university to cancel the course.

“I am extremely concerned that UW-Madison finds it appropriate to teach a course called, ‘The Problem of Whiteness,’ with the premise that white people are racist,” he said in a statement. “Even more troubling, the course is taught by a self-described ‘international radical’ professor whose views are a slap in the face to the taxpayers who are expected to pay for this garbage.”

The university responded by stating “we believe this course, which is one of thousands offered at our university, will benefit students who are interested in developing a deeper understanding of race issues. The course is a challenge and response to racism of all kinds.”

“All of the books have a disturbing trend, and that’s pointing to all white people as the root cause of social injustices for this country,” student Lauren Clark said at the time.