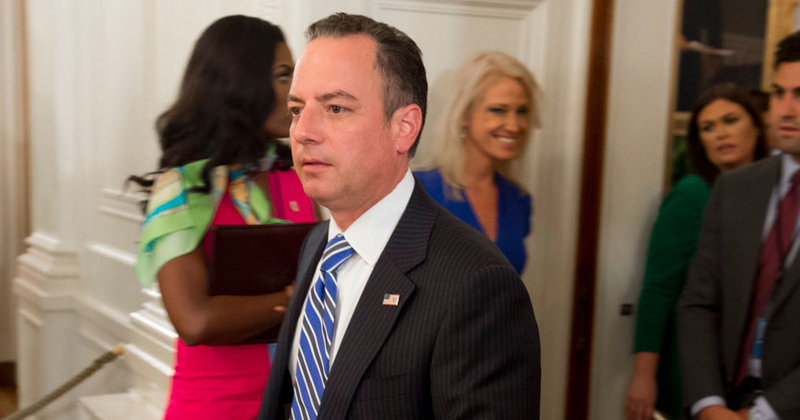 White House Chief of Staff Reince Priebus was removed from his post suddenly Friday, amid accusations he was leaking internal information to the press.

Reports claim Priebus was asked to resign as a fury of leaks continue threatening to devastate the young Trump administration.


The dismissal follows a New York Times report which claimed that “Mr. Trump has openly told people that he has lost faith in Mr. Priebus.”

“He has said he wants ‘a general’ as chief of staff, and has focused on John F. Kelly, the retired four-star Marine now serving as homeland security secretary,” The Times wrote Thursday. “Many of his advisers, however, consider that a bad idea.”

President Trump confirmed shortly after the removal of Priebus that Kelly would in fact be appointed as the new White House chief of staff.

I am pleased to inform you that I have just named General/Secretary John F Kelly as White House Chief of Staff. He is a Great American….

…and a Great Leader. John has also done a spectacular job at Homeland Security. He has been a true star of my Administration

I would like to thank Reince Priebus for his service and dedication to his country. We accomplished a lot together and I am proud of him!

In an interview published Thursday, Scaramucci attempted to probe an editor with the New Yorker on whether Priebus was a leaker, and threatened to fire the entire White House communications staff in the process.

“They’ll all be fired by me,” Scaramucci said. “I fired one guy the other day. I have three to four people I’ll fire tomorrow. I’ll get to the person who leaked that to you. Reince Priebus—if you want to leak something—he’ll be asked to resign very shortly.”

On Friday, Priebus was identified by Trump insider Roger Stone to have pushed for the appointment of Deputy Attorney General Rod Rosenstein, who then recommended a special counsel investigate allegations of Trump-Russia collusion.