The White House panel on NSA spying released its report today, slamming mass surveillance and vindicating what critics have been saying all along.

Specifically, the commission set up by President Obama – formally known as the Review Group on Intelligence and Communications Technologies – found (page 104):

Our review suggests that the information contributed to terrorist investigations by the use of section 215 telephony meta-data was not essential to preventing attacks and could readily have been obtained in a timely manner using conventional section 215 orders. 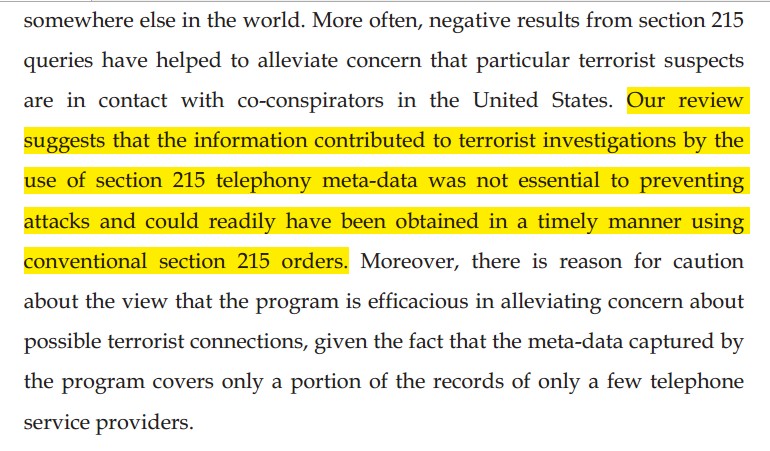 In other words, sucking up every American’s metadata is unnecessary.

The panel recommends that National Security Letters be reviewed by a real court before being approved (page 93):

We cannot discount the risk, in light of the lessons of our own history, that at some point in the future, high-level government officials will decide that this massive database of  extraordinarily sensitive private information is there for the plucking. Americans must never make the mistake of wholly “trusting” our public officials. As the Church Committee observed more than 35 years ago, when the capacity of government to collect massive amounts of data about individual Americans was still in its infancy, the “massive centralization of . . . information creates a temptation to use it for improper purposes, threatens to ‘chill’ the exercise of First Amendment rights, and is inimical to the privacy of citizens.” 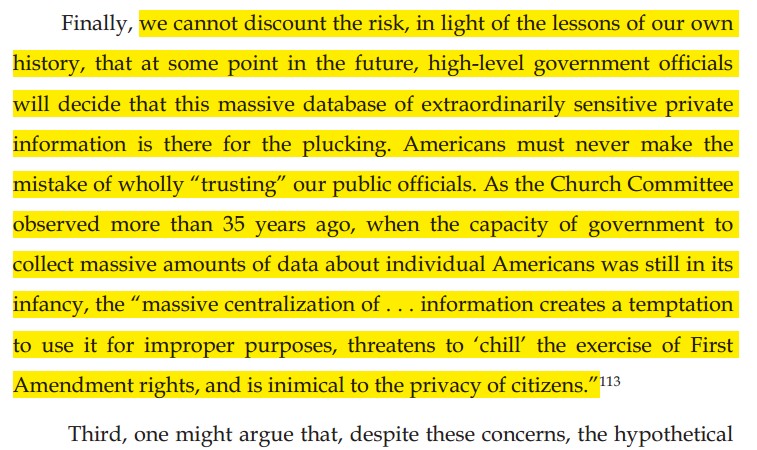 And the Commission says that the government should stop industrial espionage … and undertake manipulation of financial systems (page 221):

(1) Governments should not use surveillance to steal industry secrets to advantage their domestic industry;

(2) Governments should not use their offensive cyber capabilities to change the amounts held in financial accounts or otherwise manipulate the financial systems …. 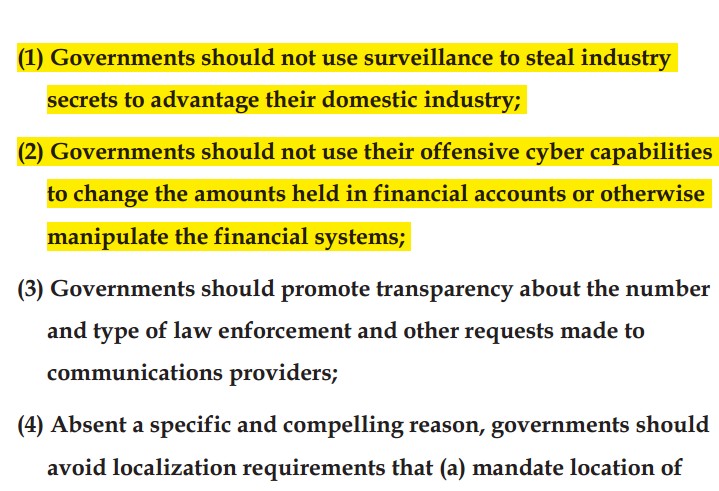 Indeed, economic advantage has always been one of the main reasons for spying.

As one of the commissioners – former counter-terrorism czar Richard Clarke – told the New York Times, the government shouldn’t do things just because they can:

Just because we can doesn’t mean we should.

As Senator Patrick Leahy said today on the Senate floor:

The message is very clear. The message to the NSA is now coming from every branch of government, from every corner of our nation, ‘NSA you have gone too far.’ [The report says] what many of us have been saying, that just because we can collect massive amounts of data doesn’t mean we should do so.