Mass shootings on military bases illustrate the problems with gun control, perhaps more effectively than any other tragedy. Military personnel, highly trained in the safe and effective use of firearms, shouldn’t be disarmed and left helpless enough that they can’t even protect themselves on military bases. After the second such incident since 2009, a White House petition is asking for such rules to be eliminated. 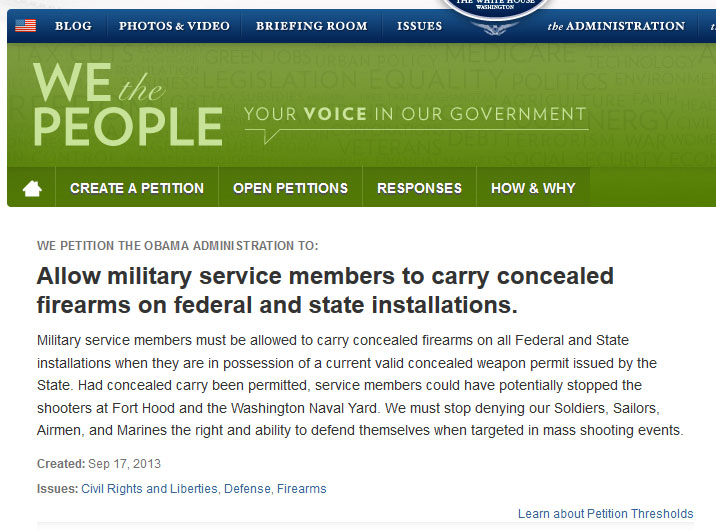 The petition starts “Military service members must be allowed to carry concealed firearms on all Federal and State installations when they are in possession of a current valid concealed weapon permit issued by the state.” Indeed, armed, trained military personnel would be able to carry concealed weapons at places like school and state capitol buildings as well, both of which are very vulnerable to attack.

It goes on to say that, “had concealed carry been permitted, service members could have potentially stopped the shooters at Fort Hood and the Washington Naval Yard.” Concealed carry was forbidden at the locations of both the Fort Hood and Washington Naval Yard, though they were both military installations. Had military members been able to carry their weapons, the shooter in both cases would only have been able to kill one or two people before being killed himself, if he had even attempted the shooting.

When James Holmes carried out the Aurora Theater shooting in 2012, he passed multiple, bigger theaters and went to the nearest location which forbade concealed weapons. A couple days later, another person attempted a shooting at a movie theater in San Antonio and was stopped before he was able to fire a single round.

The person who stopped him was an off-duty policewoman. Similarly, a couple days after Sandy Hook, a would-be mass shooter at a mall in Oregon was stopped by someone with a concealed weapon. Stories like this are more common than those of mass shootings, though they don’t gain as much media attention because they simply don’t impact as many people’s lives. The main counterargument to these statistics by gun control advocates is that more guns in society will allow more gun-related accidents.

That is not an issue in allowing well trained military professionals to carry concealed weapons. There are many such people in society, and they could make a difference in combating mass shootings while avoiding the arguments used by the left. There is simply no justification for leaving military service members helpless on their own bases, but the benefit of this petition could extend far beyond that simple truth.

Obama launched the “We the People” petition platform in September 2011, initially stating that he would respond to every petition with 25,000 or more signatures. The first petition was for the White House beer recipe. After the 2012 elections, the petitions became a popular outlet to draw attention and demand the president’s response to popular concerns and discontentment, and soon the number of signatures requires for a response increased to 100,000. This petition, though, is just over 2,000 signatures away from that goal after only three days.