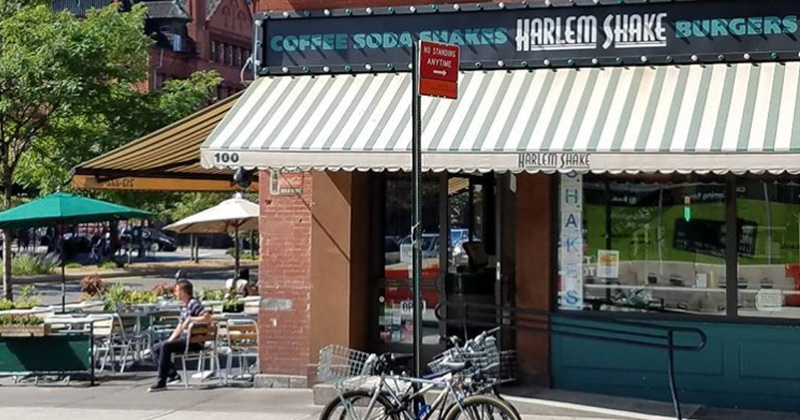 A history professor from Rutgers University was banned from patronizing a diner in Harlem after he penned a scathing rant about the white children he encountered there.

The academician complained there were too many “little Caucasian assholes” when he visited the Harlem Shake diner last week. 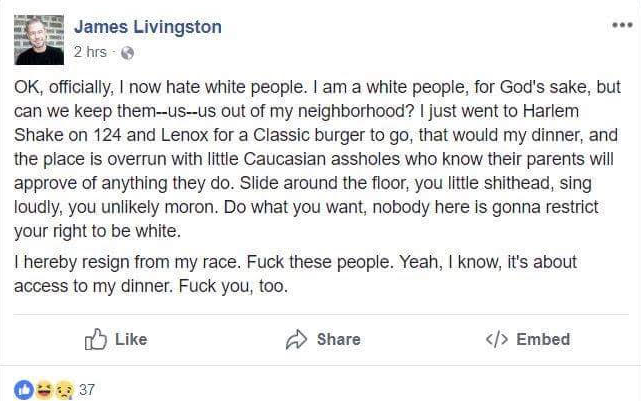 “I just went to Harlem Shake on 124 and Lenox for a Classic burger to go, that would my dinner [sic], and the place is overrun with little Caucasian assholes who know their parents will approve of anything they do,” an irritated Livingston wrote in a post obtained by The Daily Caller.

“Slide around the floor, you little shithead, sing loudly you unlikely moron. Do what you want, nobody here is gonna restrict your right to be white,” Livingston wrote.

“I hereby resign from my race. Fuck these people. Yeah, I know, it’s about access to my dinner. Fuck you too.” 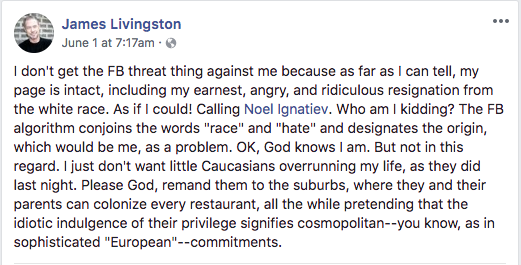 Speaking to The Blaze, the owners of the restaurant, Jelena Pasic and Dardra Coaxum, condemned Professor Livingston’s comments, and asked that he not return.

“For five years and counting, we built our business on a prerogative [of] cherishing diversity within our ownership, staff and customers in our beloved Harlem COMMUNITY. We refuse to be sucked into your racist rants, so if you wish to name drop, please use names of those with similar views,” the two businessowners told The Blaze.

They added they wanted the professor to delete their business’ name from the post.

“We ask that our name is removed from your rant because we do not want to have anything to do with you,” they stated. “And yeah, we ask that you get your burgers somewhere else. We do not tolerate ‘racism’ either. We thrive on equality and fairness and have full intentions to keep it that way!”

In an Instagram post yesterday, the two women said they’re happy to “serve men women and children from across the globe and mostly from our beloved Harlem community.”

Even the coolest cats in Harlem know that for the past five years and counting, Harlem Shake has been and continues to be an active member of the diverse and evolving Harlem community and beyond. We proudly have diverse ownership, staff and most importantly, customers! Every day we serve men women and children from across the globe and mostly from our beloved Harlem community. Thank you Harlem for being our home and we are proud to serve you all! #HarlemShakeNyc #Harlem #Uptown #Inclusion #Community #Support #YourFavoriteBurgerJoint #burgers #shakes #goodtimes #ownership #ketchup #mustard #love

Rutgers University indicated they plan to investigate the incident.

“There is no place for racial intolerance at Rutgers. This matter has been referred to the appropriate leaders at the Rutgers-New Brunswick campus, where Dr. Livingston teaches, to determine whether his comments violate university policies prohibiting discrimination and harassment,” the school wrote in a statement.

Update: Commenters have pointed out this is the same James Livingston who was ordered to pay $112,500 of his daughter’s college expenses in 2014 in accordance with a divorce settlement.