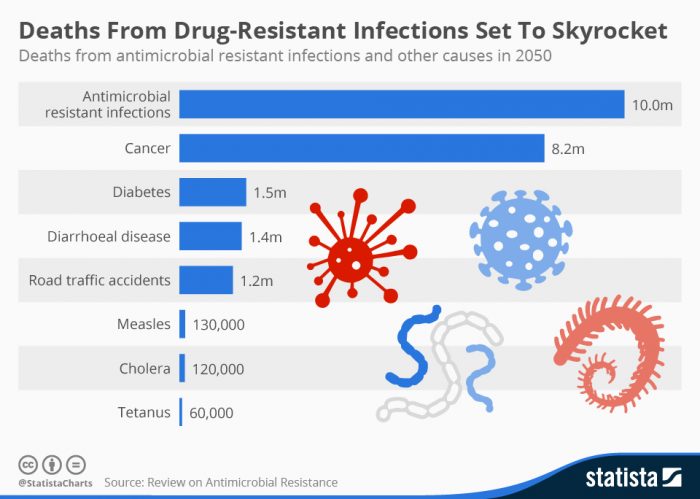 In June the World Health Organization (WHO) published a new classification of antibiotics aimed at fighting drug resistance, with penicillin-type drugs recommended as the first line of defense, and others only when absolutely necessary. [1]

(What’s more, although the issues outlined in the video above hold true, it is also true that creating new antibiotics isn’t so profitable for drug companies. This creates little incentive to spend money on further research, instead of just churning out what is already available in the market.)

It is the largest revision of the antibiotics section in the WHO Essential Medicines List in its 40-year history.

Scientists have warned that drug resistance is a health crisis in the making, and could kill more people than cancer. To put that in perspective, the WHO said in 2014 that it expected cancer cases to surge 57% worldwide over the next 2 decades.

Thirty-nine antibiotics for 21 common syndromes are included in the “Essential Medicines List.” They are broken down into 3 groups:

Fluoroquinolones are fluoride-based antibiotics with links to severe neurological side effects, including severe pain, neuropathy, and paralysis, as well as other complications. The FDA slapped a “black box” warning, the agency’s most serious warning, on the drug class due to its potential to cause major health issues – bigger issues than fluoroquinolones are often prescribed to treat.

Colistin, a polymyxin, has been in the news quite a bit in recent years because its overuse in livestock has caused bacteria to grow increasingly resistant to it. It’s placement on the “Reserve” list raises questions about how producers of such antibiotics could make money, according to Suzanne Hill, WHO’s Director of Essential Medicines and Health Products. [1]

“What we need to do is stop paying for antibiotics based on how many times they are prescribed, to discourage use. We don’t want colistin used very frequently. In fact, we don’t want it used at all.

What we need to do as a global community is work out how we pay the company not to market colistin and not to promote it and to keep it in reserve.”

Hill acknowledged the economic incentive system in drug development revolves around sales and it is likely there will be “a very large economic impact” for drug companies that make antibiotics in the “Reserve” category. [3]

The list takes into account antibiotic use in farm animals, and was developed together with the UN Food and Agriculture Organization and the World Organization for Animal Health.

Marie-Paule Kieny, assistant director-general for health systems and innovation at the WHO, said the WHO doesn’t see the list changes as “a quick-fix solution,” but scientific evidence backs the notion that it could cut the number of dangerous infections. [3]