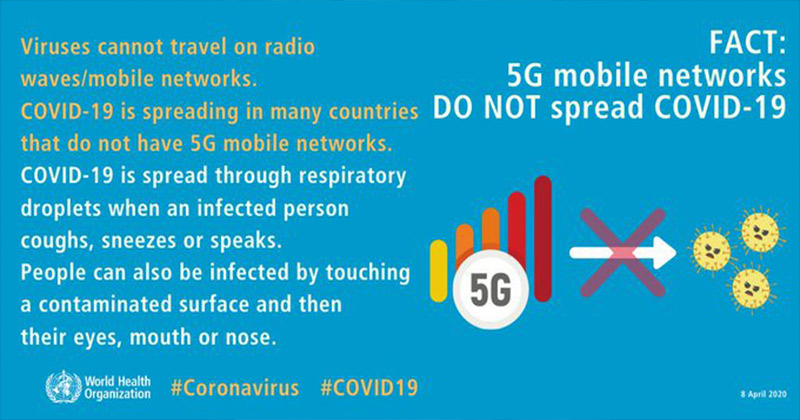 The World Health Organization (WHO) released an infographic on social media Thursday addressing claims circulating online that 5G mobile networks could be involved in the spread of COVID-19.

“Viruses cannot travel on radio waves/mobile networks,” WHO continues. “COVID-19 is spreading in many countries that do not have 5G networks.”

The image then explains “COVID-19 is spread through respiratory droplets when an infected person coughs, sneezes or speaks. People can also be infected by touching a contaminated surface and then their eyes, mouth or nose.” 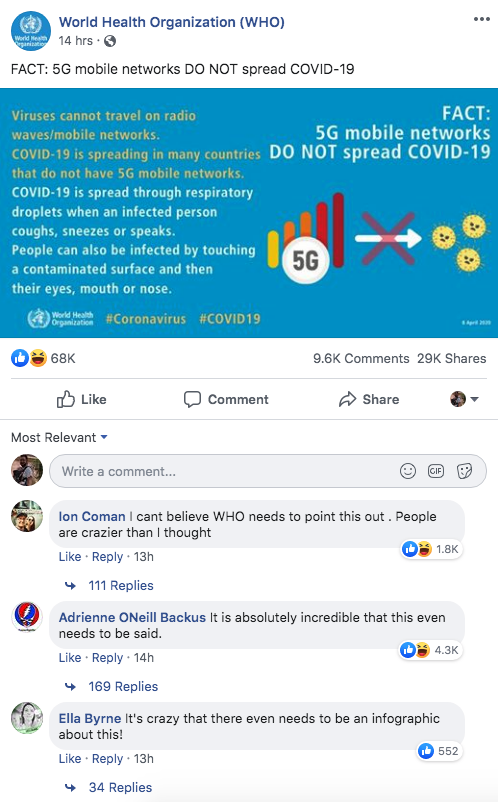 The infographic was released just days after Google-owned YouTube announced it will be deleting videos that raise concerns about a possible correlation between 5G and the coronavirus.

Infowars’ Jamie White reports, “The video platform removed a London Real interview featuring David Icke where he claimed that 5G is part of a larger plot to control humanity, pointing to the instances of Europeans destroying several 5G towers as evidence that many people don’t support the installation of the new technology.”

In the name of Free Speech, Infowars has uploaded the full interview to Banned.video:

WHO could also be responding to Europeans who have recently destroyed several 5G towers, proving many people don’t support the installation of the new technology.

The WHO “fact sheet” on 5G and COVID-19 doesn’t even accurately address the claims being made, instead claiming skeptics think coronavirus is “traveling on radio waves/mobile networks.”

If true, a weakened immune system alone would make an individual more susceptible to catching COVID-19.

A viral Instagram post by Hollywood actor Woody Harrelson was based off the same study by Dr. Pall.

“The question that is being raised here is not whether 5G is responsible for the virus, but rather whether 5G radiation, acting via VGCC activation may be exacerbating the viral replication or the spread or lethality of the disease,” professor Pall wrote.

Early in 2019, hundreds of scientists signed the “International EMF Scientist Appeal” in an effort to bring attention to “increasing exposure to EMF generated by electric and wireless devices.”

“Numerous recent scientific publications have shown that EMF affects living organisms at levels well below most international and national guidelines,” the international appeal letter states. “Effects include increased cancer risk, cellular stress, increase in harmful free radicals, genetic damages, structural and functional changes of the reproductive system, learning and memory deficits, neurological disorders, and negative impacts on general well-being in humans. Damage goes well beyond the human race, as there is growing evidence of harmful effects to both plant and animal life.”

David Icke elaborated on his theories behind 5G and COVID-19 in the following interview on The Alex Jones Show:

Senator Richard Blumenthal asked about health studies on 5G over a year ago, so COVID-19 isn’t the beginning of humanity’s skeptical outlook on the technology.