A subliminal message can go a long way. It’s defined as sensory stimuli below an individual’s threshold for conscious perception.

Coupled with strong visual and auditory suggestions, the senses easily become overwhelmed and leave people in openly suggestive states, in many cases even preparing the minds of individuals for predictive programming.

Alan Watt described predictive programming as, “a subtle form of psychological conditioning provided by media and films to acquaint the public with planned societal changes so as to be implemented by our “leaders” unabated. If and when these changes are put to task, the public will already be familiarized with them and will accept them as “natural progressions” thus lessening any possible public resistance or objection.” People in the theater the night of the Batman shooting reported seeing the shooter get in front of the crowd and start shooting, however many of them reported that they didn’t react because they thought it was all “part of the show.”

It is not these peoples’ fault that they didn’t immediately rush for cover.

My hypothesis is that people in the theater that night were purposely shown the trailer to induce mild hypnotic trances and “program” them to stay in their seats, at least momentarily.

Warner Brothers alleges, up until the night of the massacre, they had forgotten that their trailer for the upcoming 40’s crime drama Gangster Squad contained a scene where gangsters shot through a movie screen at movie-goers inside a theater.

Since the shooting, WB has removed the trailer from The Dark Knight Rises movies, but that’s not all. They’ve gone as far as to remove many trailers showing the shooting from You Tube.

The videos below were working in the U.S. at one time. Now they’ve been blocked by either messages that state these videos are not available in your country or on copyright grounds. Some just skip to the next trailer in their playlist:

What did Warner Brothers attempt to accomplish by blocking these trailers?

Here’s what I think:

If the massacre was a planned false-flag terror event, the highest death toll would be achieved if the crowd of movie-goers stayed in place and let themselves be shot, at least for a moment (think 9/11 and how people in the towers were told to stay in their buildings).

Theoretically, the “programming” contained within the trailer could have desensitized the crowd to the type of violence that was scheduled to take place. It would have programmed people to stay in their seats and let themselves be shot at, at least for a few brief moments. The trance could easily be broken if something traumatic happened, for instance, hearing loud bangs, getting shot, a canister of tear gas hitting you in the head, blood splattering into your eyes, or your neighbor falling limp right next to you.

Is it mere coincidence that this trailer appeared right before a massacre emulating it took place? I think not. Jurriaan Maessen wrote last month about predictive programming: “Classic predictive programming is usually set in motion to desensitize a target audience to a concept, a possibility, or an event- so when an idea is finally introduced into society, or when an event actually occurs, they have been carefully foreshadowed, pre-programmed you might say, in the minds of people.”

It’s obvious that Warner Brothers sensed this connection would be made and desperately attempted to remove trailers featuring this violence; however, as we all know, once something is on the internet, it’s an uphill battle to remove every trace of it:

Further “eerie coincidences” ahead of the shooting include people at the Rocky Vista University College of Osteopathic Medicine, just a mere 16 miles from the Century theater, running a drill the same day of the massacre that showed students “how to respond if a shooter fires at people in a movie theater and also uses a bomb in the attack,” as reported by the Denver Post.

As we have seen throughout the past, predictive programming is employed to desensitize a public and often foreshadow important events.

In 2001 the FOX series The Lone Gunmen aired a pilot that eerily predicted 9/11. From Wikipedia: “One retrospectively interesting aspect of this pilot episode is that the airliner has been hijacked (via remote control of the plane’s autopilot) and, by the end, both Byers and his father have boarded the plane to try to stop the hijacking. Through the aid of the other Gunmen, they are able to regain control of the plane and just miss crashing into the World Trade Center with the airliner. This, of course, was before the actual 9/11 attack against the World Trade Center later that year.”

Other instances of predictive programming have occurred on FOX. In the 1993 Marge vs. the Monorail Simpsons episode this appeared (notice the painting to the right of the couple): 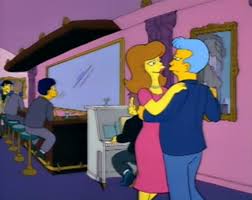 In the scene it pans to the left to show portraits of other disasters such as the Hindenburg.

In 1997, the same series showed this in their “The City of New York vs. Homer Simpson” episode:

A lack of knowledge of the powerful effects of predictive programming is what whoever planned this event depends on. Once you awaken to the subliminal all around you, once you “put on the glasses,” you see that we are always inundated with strongly influential, subconscious messages.