Sometime soon, we’ll take a shot at summing up our long-term economic future with just a handful of charts and research results. In the meantime, we’ve created a new chart that may be the most important piece. There are two ideas behind it:

1. Wars and political systems are the two most basic determinants of an economy’s long-term path. America’s unique pattern of economic performance differs from Russia’s, which differs from Germany’s, and so on, largely because of the outcomes of two types of battles: military and political.

Our latest chart isolates the fiscal piece by removing war effects and considering only large, developed countries. In particular, we look at government budget balances without military spending components.

(Military spending requires a different evaluation because it succeeds or fails based on whether wars are won or lost. Or, in the case of America’s adventures of the past six decades, whether war mongering policies serve any national interest at all. In any case, military spending isn’t our focus here.)

There are 11 countries in our analysis, chosen according to a rule we’ve used in the past – GDP must be as large as that of the Netherlands. We start in 1816 for four of the 11 (the U.S., U.K., France and Netherlands). Others are added at later dates, depending mostly on data availability. (See this “technical notes” post for further detail.) Here’s the chart: 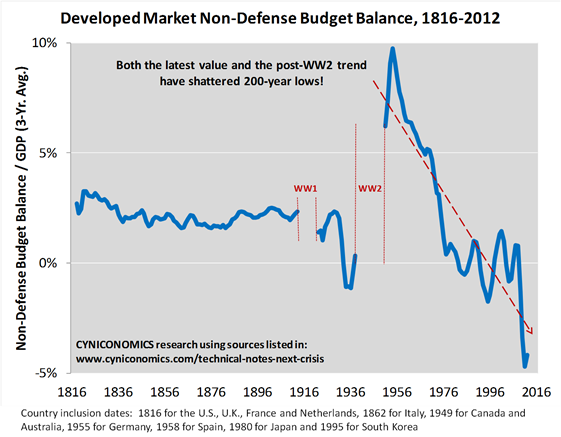 Not only has the global, non-defense budget balance dropped to never-before-seen levels, but it’s falling along a trend line that shows no sign of flattening. The trend line spells fiscal disaster. It suggests that we’ve never been in a predicament comparable to today. Essentially, the world’s developed countries are following the same path that’s failed, time and again, in chronically insolvent nations of the developing world.

Look at it this way: the chart shows that we’ve turned the economic development process inside out. Ideally, advanced economies would stick to the disciplined financial practices that helped make them strong between the early-19th and mid-20th centuries, while emerging economies would “catch up” by building similar track records. Instead, advanced economies are catching down and threatening to throw the entire world into the kind of recurring crisis mode to which you’re accustomed if you live in, say, Buenos Aires.

How did things get so bad?

Here are eight developments that help to explain the post-World War 2 trend:

1. In much of the world, the Great Depression triggered a gradual expansion in the role of the state.

2. Public officials failed to establish a sustainable structure for their social safety nets, and got away with this partly by sweeping the true costs of their programs under the carpet.

3. Profligate politicians were abetted by the economics profession, which was more than happy to serve up unrealistic theories that account for neither unintended consequences nor long-term costs of deficit spending.

6. Regulators took markets further out of the equation by rewarding private banks for lending to governments, while politicians and central bankers effectively underwrote the private bankers’ risks.

8. Budget decisions were made without consideration of the inevitability of these setbacks, because economists wielding huge influence over the budgeting process (think CBO, for example) assumed a naïve utopia of endless economic expansion.

Sadly, all of these developments are still very much intact (excepting small improvements in budget projections that we’ll address next week). They tell us we’ll need substantial changes in political processes, central banking and the economics profession to avert the disaster predicted by our chart. And we’re rapidly running out of time, as discussed in “Fonzi or Ponzi? One Theory on the Limits to Government Debt.”

On the bright side, a fiscal disaster should help trigger the needed changes. Every kick of the can lends more weight to the view expressed by some that the debt super-cycle – including public and private debt – needs to go the distance, eventually reaching a Keynesian end game of massive collapse. At that time, we would expect a return to old-fashioned, conservative attitudes toward debt.

As for the chart, it helps to flesh out a handful of ideas we’ve been either writing about or thinking of writing about. We’ll return to it in future posts, including one drilling down to the individual country level that we’ll publish soon.