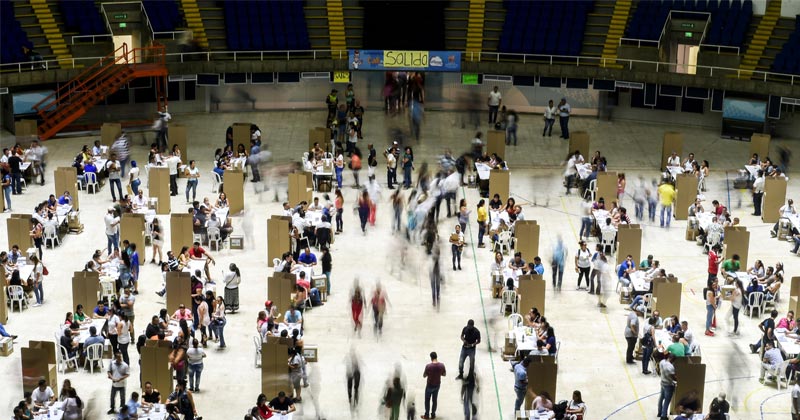 One of the central issues in the current international furor over Venezuela are claims by some foreign governments that the results of the May 2018 elections do not reflect the true preferences of the voters.

For example, although Italy vetoed the proposal, the EU had been preparing to recognize the opposition party’s leader as Venezuela’s interim leader if a new election were not held immediately.

Meanwhile, Nicolas Maduro, the current president, has insisted that there is no need for presidential elections until 2025. (The usual presidential term in Venezuela is six years.)

But both sides’ positions just come down to making empirical claims about the level of democratic support each has, and outside the elections results, we don’t have much actual empirical data to go on. What’s more, the longer the period until the next election, the higher are the stakes for winners and losers both.

The Venezuela situation illustrates how the frequency of elections for elected officials is no mere academic question. It can have profound effects on the ability of elected governments to push through their agendas.

In the US, the extant country with the longest history of electoral politics, this issue is routinely ignored. This is in large part because so many Americans adhere to a panglossian view of domestic politics in which it is assumed that the current institutional status quo is the best possible way of doing things. The fact that the US Constitution has enshrined four-year presidential terms and six-year terms for US Senators for more than two centuries has led many to believe that there really is no other reasonable way of doing things.

Federal, elections, however, are not the only elections in the United States. Historically, state-level elected officials have served terms considerably shorter than those of federal legislators. Moreover, US states (as British colonies) were employing annual — and even semi-annual — elections before the United States existed.

For example, were we to just list a smattering of state-level election policies, we would find something quite different from what we’ve now grown accustomed to1:

We can also see a preference for regular elections in the term length of state governors.

As noted by Anthony Gierzynski, “Since 1780, gubernatorial term lengths in the United States have gradually evolved from an average term length of one year to two years, to today’s common term length of four years.”

In 1780, nearly all states used gubernatorial terms of one year, and none had term lengths of four years. Today, one-year terms are long gone, and two-year terms have been all but completely abandoned.

Fig 1: Total US States by Length of Governor’s Term

In their book State Legislatures Today: Politics Under the Domes Peverill Squire and Gary Moncrief note that state government has typically moved from more frequent elections to less frequent elections since the early nineteenth century. The authors summarize the current situation:

Many advocates for the status quo contend that states moved toward more infrequent elections because “we learned it works better” or some variation of the claim that “experience showed that the status quo is better.” The question we might then pose is: “better for whom?”

Not insignificantly, perhaps, elected officials themselves have long pressed for longer terms and have claimed that shorter terms too excessively restrained their ability to govern. Frequent elections have required more campaigning, and more time spent with voters, which cuts into a legislator’s ability to propose and pass legislation.

Elected officials, of course, have long despised the need to stand for frequent elections and to submit to voter approval of their agendas.

In the early days of the United States, voters appeared to be well aware of these considerations, and they were not especially sympathetic toward the complaints of politicians who no doubt would have preferred longer terms. Little has changed in the current environment, as summarized by Gierzynski:

Political Scientist Larry Sabato … argued that historically two year terms were “considered more democratic, because [they] subjected the governor to the judgment of the people at more frequent intervals.” Conversely, two year terms leave the governor “in the situation where, in the first term, he must spend the first year getting acquainted with his position and the second year in campaigning for reelection.” University of North Carolina at Chapel Hill Political Scientist Thad Beyle … concurred, saying that “The one message that I repeatedly heard about four year terms is that in the first year you learn how to be governor, in the second and third year you can do what you had hoped to do, then in the fourth year you are running for reelection. With two year terms, you do not get those productive second and third years.”

But what are we to make of phrases like “those productive second and third years.” Productive for whom? And what is meant by “productive”? The fact that politicians say they need longer terms in office so they can do more while in office should itself be regarded as an argument for shorter terms and more frequent elections.

More naïve observers might insist that longer terms allow elected officials to do “the people’s business,” but such fanciful views of democracy ignore the fact that “the people” have never agreed on what business an elected official ought to be ramming through the legislature. If an elective official spends two years doing what’s “productive” for the 51 percent of the voters who elected him, he may  be spending that time doing what’s destructive to the well-being and interests of the 49 percent of voters who want him out.

Thus, earlier Americans may have been the far savvier group in recognizing it was better to have elected officials who felt they had very little time to or leeway do much of anything between elections.

We also often encounter advocates for longer terms who claim frequent elections are unacceptable because they don’t want to see so many campaign ads on television or so much campaign coverage in mass media. Given that these people could easily solve their problem by just consuming less mass media, its hard to see why this objection ought to be taken seriously. This “argument” is little more than a demand to lessen oversight of politicians because some people regard themselves as too emotionally fragile to deal with the realities of frequent political debate.

After all, if the politicians themselves complain their terms are too short, that suggests shortening the length of terms is exactly the correct thing to do.

It’s for good reason that “term length is thought to influence member behavior, with longer terms giving legislators greater freedom from electoral pressures and shorter terms providing less freedom.”2 Who can doubt that US senators have more freedom to act than a House member in a competitive district? Moreover, if US presidents were required to stand for election every two years instead of every four years, it’s unlikely he or she would have as much time to formulate an agenda beyond a small handful of issues.

And then there is the problem of infrequent elections as now seen in Venezuela. When an elected official claims a mandate for six years, what are we to think if the voters change their minds one year or three years into that six-year term? Are the voters to be expected to simply accept that the elected official has free rein during this period no matter what?

While we know that the “will of the people” is a fiction, elections can nonetheless have value by acting to disrupt efforts by politicians to consolidate power and carry out grandiose plans unmolested by the voters. Granting an elected official the freedom to “be productive” for years at a time between elections is a risky endeavor, to say the least.

Admittedly, the Venezuelan problem can be partly addressed by limiting what prerogatives a government has overall. Were the Venezuelan government’s power tightly circumscribed by a high degree of decentralization or by constitutional limitations — assuming a sizable proportion of the population demanded such things also — the situation would be quite different. But it’s worth noting that, under certain conditions, the freedom of politicians to act can also be limited by frequent elections. In eighteenth century America, this was often regarded as common sense. It might be a bit of wisdom we’d be wise to revisit.

Kathy Zhu explains why she disagrees with other conservatives on different subjects, and why she wants to fight for her representation in society.

Judge Roy Moore: Standing Up For The 10th Amendment & The Entire Constitution