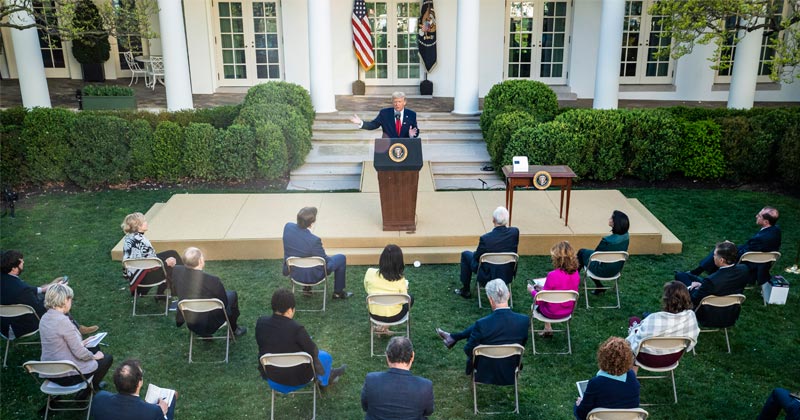 Why is President Trump wasting his time taking questions from reporters who are out to get him when he can instead answer questions directly from small business owners most impacted by the coronavirus?

Media pundits have already demanded corporate outlets to stop airing Trump’s pressers anyway, and a NPR station in Seattle has already done so.

Keep in mind that the press is not a special, regulated class – it’s simply an activity the people can freely engage in as defined by the First Amendment (with emphasis added):

Congress shall make no law respecting an establishment of religion, or prohibiting the free exercise thereof; or abridging the freedom of speech, or of the press; or the right of the people peaceably to assemble, and to petition the government for a redress of grievances.

So then, why shouldn’t President Trump deliver the news from his administration directly to small business owners, the people impacted the most? They’re the ones who are going to report to their employees what lies ahead.

And why won’t Trump conduct Fireside Chats to the American people like Franklin Roosevelt did, especially as the president is pushing a nationwide infrastructure bill that draws comparisons to Roosevelt’s New Deal infrastructure projects?

“The chats were influential in reformulating the American worldview from one of despair to one of hope during a time of multiple crises, including the Great Depression and World War II,” according to Britannica.com. “Fireside Chats reinforced the importance of broadcast media and the use of common, everyday language when addressing the American people.”

While Trump’s daily task force press briefings are effective, given his recent surge in approval ratings, he’s still talking to an audience of reporters he’s never going to please who just want to nail him to a wall.

CNN’s Jim Acosta does not represent the president’s base, or really even the American public as a whole given how CNN correspondents have belittled the president’s supporters, which consists of at least half the nation:

Don Lemon’s ✌️expert✌️panel last night insinuated that Trump supporters are idiots that can’t read, write, use maps or do math.

So why is the president wasting his time getting into arguments with this guy when he could be taking questions from a restaurant owner who’s about to lay off his entire staff and possibly shut down for good?

Acosta, on the other hand, is still going to have a job regardless of the coronavirus pandemic, and in fact it’s job security for him to get into verbal spats with the president. Trump has little to gain combating Acosta.

The fact is, he got elected by bypassing the mainstream media to talk directly to the American people.

That shouldn’t stop just because Trump got inaugurated. If he truly represents the American people, then he should speak to them directly without filtering it through a third-party such as the corporate media.

The American people should be his direct audience. The mainstream media can still report on what he said, of course, but that shouldn’t be his target audience.

Weeks ago, reporter Savannah Hernandez revealed that business owners were taking steps to protect their stores from potential civil unrest or simple vandalism amid the coronavirus chaos.