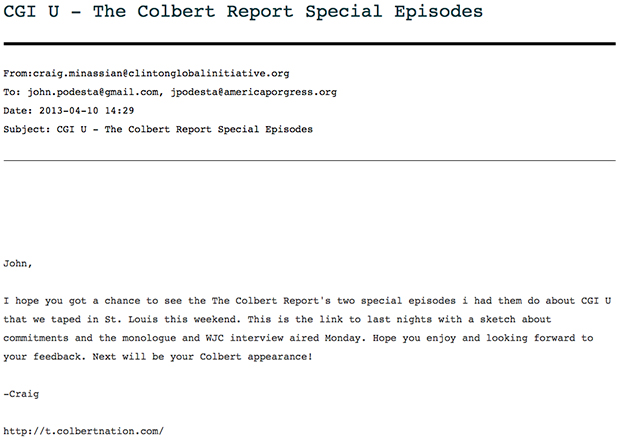 The Colbert Report apparently colluded with the Clinton Foundation to create a favorable public opinion of the controversial organization, according to an email released by Wikileaks.

In the 2013 email, Craig Minassian, the foundation’s Chief Communications Officer, said he had the comedy show produce two skits about the Clinton Global Initiative which promoted positive aspects of the Clinton Foundation.

“John, I hope you got a chance to see The Colbert Report‘s two special episodes I had them do about CGI University that we taped in St. Louis this weekend,” wrote Minassian. “This is the link to last night’s with a sketch about commitments and the monologue and WJC [Bill Clinton] interview aired Monday.”

“Hope you enjoy and looking forward to your feedback. Next will be your Colbert appearance!”

The wording of the email is fueling speculation that the Clinton Foundation was given unprecedented control over the content of the episode, much like how the New York Times gave the Hillary Clinton campaign “veto power” over which of her statements journalists could use.

On the other hand, skeptics suggest the email was innocuous because The Colbert Report is simply comedy, but it’s worth pointing out that comedy shows are increasingly shaping the political views of young adults.

The Colbert Report in particular has suffered a ratings declines due to its perceived liberal bias.

“A survey by the Hollywood Reporter found that conservative viewers are turning off Colbert in droves,” reported the New York Post in 2015. “Nearly twice as many Republicans are watching Kimmel as Colbert, who has turned ‘Late Show’ into a sort of wannabe MSNBC program.”

“The pattern is familiar: When a Democrat is the guest, Colbert is Barbara Walters. When a Republican is on, he turns into Tim Russert.”

This, of course, would explain the Clinton Foundation’s interest in producing Colbert skits favorable to the embattled organization ahead of Hillary Clinton’s 2016 presidential run, especially given the foundation’s numerous controversies, such as the accusations from Haitian earthquake victims that the Clintons pocketed millions of dollars in relief funds in 2010.

“Sadly, when an earthquake rocked the nation of Haiti in 2010, corruption moved in faster than the help so desperately needed,” said Bernard Sansaricq, the former president of the Haitian Senate. “Today, the people of Haiti are still suffering despite the billions of dollars that have flowed into the Clinton Foundation.”

“The Clintons exploited this terrible disaster to steal billions of dollars from the sick and starving people of Haiti. The world trusted the Clintons to help the Haitian people during their most desperate time of need and they were deceived.”

But the scandal was largely ignored by mainstream reporters who instead gave favorable coverage of then-presidential candidate Hillary Clinton.

“Because I have become a hack I will send you the whole section that pertains to you,” Thrush wrote to Podesta in an email. “Please don’t share or tell anyone I did this [and] tell me if I f*cked up anything.”