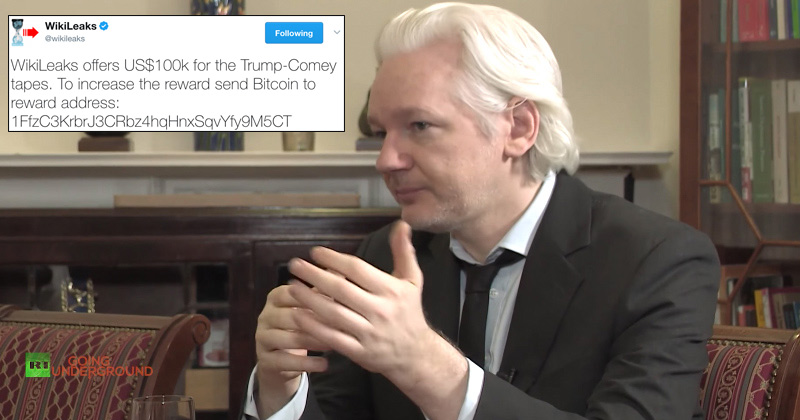 “WikiLeaks offers US$100k for the Trump-Comey tapes,” the organization tweeted.

Rumors of the tapes were first introduced in a tweet by Trump Friday in which he warned the recently-fired Comey against leaking to the press.

James Comey better hope that there are no “tapes” of our conversations before he starts leaking to the press!

“James Comey better hope that there are no ‘tapes’ of our conversations before he starts leaking to the press!” the President said.

Responding to questions on the tweet, White House press secretary Sean Spicer told reporters Friday that no other details would be provided.

“The president has nothing further to add on that,” Spicer said, later emphasizing that the tweet was not a “threat.”

A source close to Comey who spoke with CNN stated that the former FBI head is “not worried about any tapes,” while a source speaking to NBC News claimed Comey “hopes there are tapes. That would be perfect.”

The incident stems from a January dinner at the White House in which Trump allegedly demanded “loyalty” from Comey, sources speaking to the New York Times said.

“Mr. Comey declined to make that pledge. Instead, Mr. Comey has recounted to others, he told Mr. Trump that he would always be honest with him, but that he was not ‘reliable’ in the conventional political sense,” the Times reports.

In an interview set to air on Fox News this weekend, Trump described a different series of events in which the question of loyalty was never discussed.

“We don’t believe this to be an accurate account,” Huckabee Sanders said. “The integrity of our law enforcement agencies and their leadership is of the utmost importance to President Trump. He would never even suggest the expectation of personal loyalty, only loyalty to our country and its great people.”

The President has also alleged that Comey informed him on three separate occasions that he is personally not under investigation as part of the agency’s Russia probe.

“He told me that … and I’ve heard that from others,” Trump told NBC.

Comey learned of his firing earlier this week while speaking to FBI agents in Los Angeles when news of the story came on a set of nearby televisions. The former director is said to have initially believed the reports were part a practical joke.