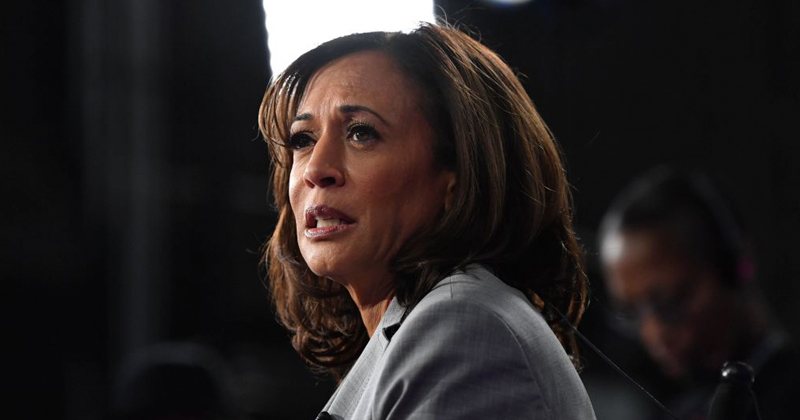 It’s a question that’s percolating online, as the Democratic field narrows ahead of the December debate.

With California Senator Kamala Harris announcing an end to her 2020 presidential campaign on Tuesday, there are now six Democrats who have so far qualified to participate in the next presidential debate.

Kamala Harris is out of the 2020 U.S. presidential race.

They’re all white, with an average age of 63.

The situation could potentially change with two other minority candidates who are currently “on the cusp” of qualifying: Hawaiian Rep. Tulsi Gabbard and Asian entrepreneur Andrew Yang, from Schenectady, New York.

To qualify for the Dec. 19 debate in Los Angeles, candidates need contributions from 200,000 unique donors, as well as two polls with 6 percent or higher support in the four early nominating states of Iowa, New Hampshire, Nevada and South Carolina. Candidates could also qualify with four polls at 4 percent or more in early nominating states or national surveys released between Oct. 16 and Dec. 12.

Alex Jones breaks down the demands of human sacrificed required by the elite to merge with AI and submit to a technological takeover of humanity.
By the way, save money while improving your daily life by ordering the Change Your Life Trifecta Pack during our Cyber Week sales!

Both Yang and Gabbard have met the donor requirement but lack one more qualifying poll to participate, though Gabbard alleged on Friday that she’s already qualified but the Democratic National Committee is playing politics to keep her at bay.

✅ Veteran
✅ Woman
✅ Minority
✅ Lifelong Dem
✅ Crossover appeal to Independents, Libertarians, Republicans
The Dem Establishment shld be excited about my candidacy. But they'd rather lose to Trump than win with me, cuz they can’t control me & that scares the hell out of them pic.twitter.com/wTWBGlwumo

Gabbard contends the DNC refuses to recognize a Boston Globe/Suffolk University survey that puts her at 6 percent support in New Hampshire.

“Again, this is another example of the DNC being arbitrary and inconsistent. New Hampshire is the first in the nation presidential primary, but the DNC has not shown its voters the respect they deserve,” Gabbard said in a statement.

“The Boston Globe is the largest newspaper in New Hampshire. The pollster the Globe uses is recognized by the DNC for other media outlets; there is no reason the DNC should not recognize this Boston Globe poll, other than adherence to a subjective, nontransparent process where party elites try to dictate to the primary voters.”

Regardless of the motivations, the reality is the Democratic debate this month is shaping up to be a very white affair, and it’s seemingly by design. The party that prides itself in promoting equality and justice for all by combating an alleged system of white supremacy is presenting only white, mostly elderly candidates to constituents.

None of the black or Hispanic candidates running are even close to qualifying. New Jersey Senator Cory Booker, former Obama secretary of Housing and Urban Development Julian Castro, and former Massachusetts Governor Deval Patrick have so far met zero of the debate thresholds, combined.

During the first Democratic debate in June, CNN and the DNC were ridiculed for an all-white panel on the first night, and the most recent debate in Atlanta last month raised more concerns.

Brookings criticized the event’s organizers and moderators for posing only one substantive question about race, despite the location in the nation’s first fully black-owned studio in one of it’s largest majority minority cities.

“The wounds of institutional racism in the United States have cascaded into a system of lost opportunities in communities of color,” Brookings opined after the November debate. “Tonight’s debate moderators helped show why those issues continue to go unaddressed.”

The DNC’s frontrunners, meanwhile, are proving that’s unlikely to change any time soon.