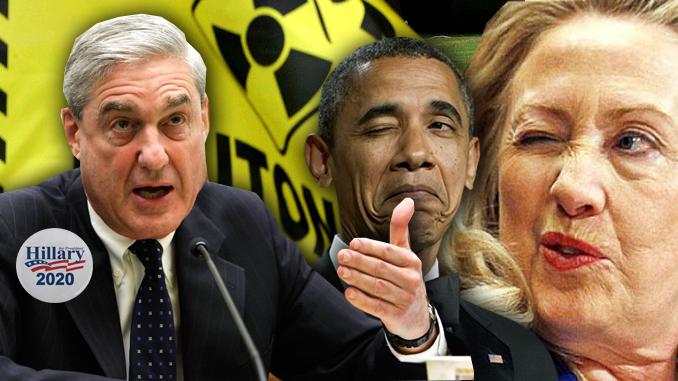 During most of the RussiaGate investigation against Donald Trump I kept saying that all roads lead to Hillary Clinton.

Anyone with three working brain cells knew this, including ‘Miss’ Maddow, whose tears of disappointment are particularly delicious.

Robert Mueller’s investigation was designed from the beginning to create something out of nothing. It did this admirably.

It was so effective it paralyzed the country for more than two years, just like Europe has been held hostage by Brexit. And all of this because, in the end, the elites I call The Davos Crowd refused to accept that the people no longer believed their lies about the benefits of their neoliberal, globalist agenda.

Hillary Clinton’s ascension to the Presidency was to be their apotheosis along with the Brexit vote. These were meant to lay to rest, once and for all time, the vaguely libertarian notion that people should rule themselves and not be ruled by philosopher kings in some distant land.

Hillary’s failure was enormous. And the RussiaGate gambit to destroy Trump served a laundry list of purposes to cover it:

Hillary should have been thrown to the wolves after she failed. When you fail the people she failed and cost them the money she cost them, you lose more than just your funding. What this tells you is that Hillary has so much dirt on everyone involved, once this thing started everyone went along with it lest she burn them down as well.

Hillary is the epitome of envy. Envy is the destructive sin of coveting someone else’s life so much they are obsessed with destroying it. It’s the sin of Cain

She envies what Trump has, the Presidency.

And she was willing to tear it down to keep him from having it no matter how much damage it would do. She’s worse than the Joker from The Dark Knight.

Because while the Joker is unfathomable to someone with a conscience there’s little stopping us from excising him from the community completely., even though Batman refuses.

Hillary hates us for who we are and what we won’t give her. And that animus drove her to blackmail the world while putting on the face of its savior.

And that’s what makes what comes next so obvious to me. RussiaGate was never a sustainable narrative. It was ludicrous from the beginning. And now that it has ended with a whimper there are a lot of angry, confused and scared people out there.

Mueller thought all he had to do was lean on corrupt people and threaten them with everything. They would turn on Trump. He would resign in disgrace from the public outcry.

It didn’t work. In the end Paul Manafort, Michael Cohen and Roger Stone all held their ground or perjured themselves into the whole thing falling apart.

Andrew Weissman’s resignation last month was your tell there was nothing. Mueller would pursue this to the limit of his personal reputation and no further.

With respect to Brexit I’ve been convinced that it would come down to reputations.

Would the British MP’s vote against their own personal best interests to do the bidding of the EU?

Would Theresa May eventually realize her historical reputation would be destroyed if she caves to Brussels and betrays Brexit in the end?

Always bet on the fecklessness of politicians. They will always act selfishly when put to the test. While leading RussiaGate, Mueller was always headed here if he couldn’t get someone to betray Trump.

And now his report is in. There are no new indictments. And by doing so he is saving his reputation for the future. And that is your biggest tell that Hillary’s blackmail is now worthless.

They don’t fear her anymore because RussiaGate outed her as the architect. Anything else she has is irrelevant in the face of trying to oust a sitting president from power.

The progressives that were convinced of Trump’s treason are bereft; their false hope stripped away like standing in front of a sandblaster. They will be raw, angry and looking for blood after they get over their denial.

Everyone else who was blackmailed into going along with this lunacy will begin cutting deals to save their skins. The outrage over this will not end. Trump will be President when he stands for re-election.

The Democrats do not have a chance against him as of right now. When he was caving on everything back in December it looked like he was done. That there was enough meat on the RussiaGate bones to make Nancy Pelosi brave.

Then she backed off on impeachment talk. Oops.

But the Democrats have a sincere problem. Their candidates have no solutions other than to embrace the crazy and go full Bolshevik. That is not a winning position.

Trump will kill them on ‘socialism.’

The Deep State and The Davos Crowd stand revealed and reviled.

If they don’t do something dramatic then the anger from the rest of the country will also be palpable come election time. Justice is not done simply by saying, “No evidence of collusion.”

It’s clear that RussiaGate is a failure of monumental proportions. Heads will have to roll. But who will be willing to fall on their sword at this point?

There is only one answer. And Obama’s people are still in place to protect him. I said last fall that “Hillary would indict herself.” And I meant it. Eventually her blackmail and drive to burn it all down led to this moment.

The circumstances are different than I expected back then, Trump didn’t win the mid-terms. But the end result was always the same. If there is no collusion, if RussiaGate is a scam, then all roads lead back to Hillary as the sacrificial lamb.

Because the bigger project, the erection of a transnational superstate, is bigger than any one person. Hillary is expendable.Lies are expensive to maintain. The truth is cheap to defend. Think of the billions in opportunity costs associated with this. Once the costs rise above the benefits, change happens fast.

If there is any hope of salvaging the center of this country for the Democrats, the ones that voted against Hillary in 2016, then there is no reason anymore not to indict Hillary as the architect of RussiaGate.

We all know it’s the truth. So, the cheapest way out of this mess for them is to give the MAGApedes what they want, Hillary.

And hope that is enough bread and circuses to distract from the real storm ahead of us.