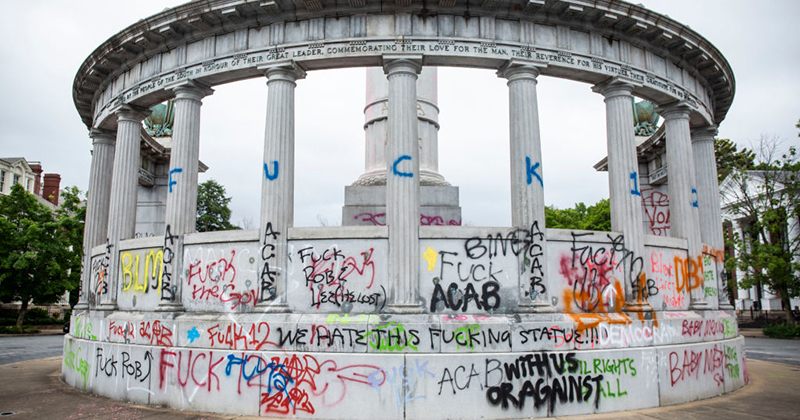 Police in various American cities especially on the East and West coasts have stood down while fanatical mobs of leftists unilaterally determine which public monuments and statues should be toppled, destroyed, and in some cases beheaded — as in the recent “beheading” of a Christopher Columbus statue at a public park in Boston.

It didn’t take long for the woke mobs to target statues of the founding fathers and American Constitutional framers in the past days.

In Portland over the weekend, a large bronze Thomas Jefferson statue that was a central feature of Jefferson High School campus was pulled down after Black Lives Matter protests there.

Walter Williams, black economics professor George Mason University, explains American history so that even a liberal can understand it

Like others across the nation, the Jefferson statue was further defaced with the words “slave owner” and “George Floyd” spray-painted across the base.

But given that increasingly even Abraham Lincoln statues are being targeted, it reveals that neither the Confederacy nor early colonial and American slaveholders are the targets, but all symbols of US history itself.

As The Federalist astutely observes:

They make no distinction between Confederate and Union, abolitionist and pro-slavery, 15th-century figures and 20th. They don’t care when a monument was erected, who built it, or why. They have not come to debate or persuade their fellow citizens to relocate these statues to museums or private property. They believe the debate is over and that they have won.

Their target is not the Confederacy. It is the United States. They mean to destroy symbols of American history writ large, because to them all of American history is racist and genocidal. Their goal is not to cleanse a nation they love of monuments to Confederate traitors who tried to secede, but to cleanse their consciences of ever having loved such an evil and irredeemably racist country in the first place.

Rioters in Philly deface a statue of Matthias Baldwin, an early abolitionist who fought against slavery 30 years before it ended. pic.twitter.com/1HKrDusPBh

Even leading abolitionist figures from history are targeted, astoundingly:

That is why you see mobs defacing statues of abolitionists like Matthias Baldwin and Union war heroes like Adm. David Farragut and Gen. George Thomas. That is why the Tomb of the Unknown Soldier of the American Revolution in Philadelphia was vandalized this past weekend with the words “committed genocide.” That is why statues of Christopher Columbus were torn down or beheaded in three cities last week.

#BLM protestors vandalised the Shaw memorial – that commemorates the all-black battalion that fought for abolition in the American Civil War pic.twitter.com/BszVzRksNe

Simply put, it now appears any white male historical figure is now “tainted” with a “racist” and “genocidal” legacy, no matter the historical record.

As another case in point from this past weekend:

Known for his anti-slavery writings pic.twitter.com/ULtvsDCAol

A “peaceful” protest took place at Central Park in Whittier on Sunday, or so we are told. It appears that initially the statue was safe, but by the end of it the Quaker abolitionist considered key in the 19th century movement for equal rights wasn’t spared by the ‘woke’ mob.

John Greenleaf, whose statue now sits damaged and vandalized, including with the spray-painted letters “BLM”, was among the most prominent literary voices leading the fight to end slavery even decades before Lincoln’s Emancipation Proclamation in 1863.

If even memorials to famous abolitionists won’t be spared, what will?

Many commentators have noticed that the statue-destroying leftist mobs in both the US and UK have something in common with a certain Mideast terror group.