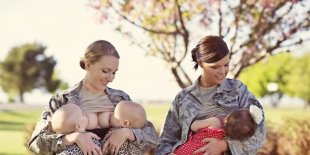 (NaturalNews) The woman behind a recent controversial photo shoot depicting a pair of female Air Force enlisted personnel breastfeeding their infants in uniform has been fired from her civilian job as an X-ray technician, though the company – naturally – says the divisive shoot had nothing to do with it.

Army vet Crystal Scott, who served from 2000-06 and whose term of service included a tour in Iraq, was terminated by Schryver Medical, a company that provides X-rays, EKGs, ultrasounds and other medical imaging services at Fairchild Air Force Base near Spokane, Wash. Scott, program director of the Mom2Mom breastfeeding awareness group at the base and now a military spouse herself, said through her lawyer that the firing was due to the photo shoot.

“She was fired due to her passion about the Mom2Mom breastfeeding campaign and speaking out on gender equality and women’s rights,” her attorney, Patricia (Pat) K. Buchanan told Yahoo! Shine, noting that Scott was let go June 1.

The company’s president, Jay Schryver, said in a statement that Scott was let go not because of her ties to the breastfeeding photo shoot – which the Air Force said was inappropriate – but because she misinformed the company about her whereabouts when she was supposed to be working.

Taking time for personal business while on the clock?

“Crystal Scott was terminated by the company on June 1st for various legitimate employment-related reasons,” Schryver said in the statement, noting that the day before she was fired she “ignored” a series of “time-sensitive tasks” she had been assigned.

“Thereafter, Ms. Scott ignored the company’s repeated attempts to contact her to inquire as to her whereabouts and status of her job assignments. When the company finally did get a hold of Ms. Scott, she informed them that she was sick and would not be working. Based on company records – including GPS data from a company van that had been assigned to her – Ms. Scott was actually at a local media outlet conducting personal business, on company time, using company equipment as transportation,” he wrote.

He went onto say that while Scott was likely enjoying the media awareness given to her cause, “at no time did Schryver Medical tell Crystal Scott that she was terminated due to any ‘media attention,’ as that contention is simply not true.”

Whether that’s true or not, it all started with a photo campaign that was designed to raise awareness of breastfeeding at the base, but which took an approach that did not sit well with the military either.

Misuse of the uniform
“The uniform was misused. That’s against regulations,” Capt. Keith Kosik, a spokesman for the Washington National Guard, told the Air Force Times. “I want to be very, very clear about this. Our issue is not, nor has it ever been, about breastfeeding. It has to do with honoring the uniform and making sure it’s not misused. I can’t wear my uniform to a political rally, to try to sell you something or push an ideology. That was our point of contention.”

Terran Echegoyen-McCabe, a member of the Air National Guard who was photographed in uniform nursing her 10-month-old twin daughters, says she was also taken aback by the photos. She and the other female airmen in the photos, Staff Sgt. Christina Luna, have been reprimanded by the Air Force.

“I have breastfed in our lobby, in my car, in the park … and I pump, usually in the locker room,” she said during a “Today” show interview shortly after the photo shoot. “I’m proud to be wearing a uniform while breast-feeding. I’m proud of the photo and I hope it encourages other women to know they can breastfeed whether they’re active duty, guard or civilian.”

As for Scott, she believes she was fired for taking part in the campaign, which she continued to defend.

“We never expected it to be like this,” Scott continued. “I’m an X-ray tech and I breastfeed in my uniform all the time,” Scott says. “Granted they’re scrubs, but people do it all the time in their uniforms. If you have a hungry baby, why would you take the time to change completely?”