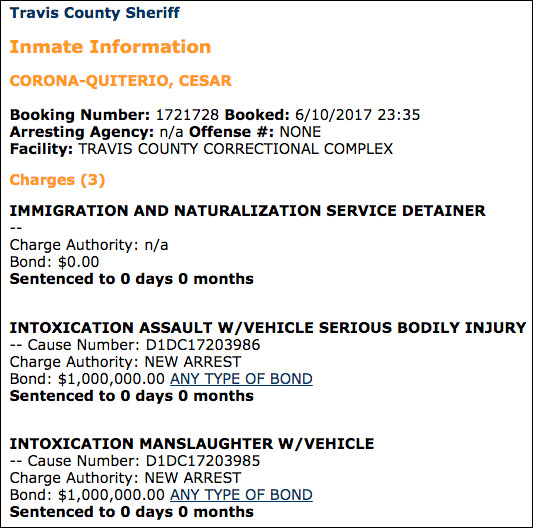 A Texas woman is still trying to cope with multiple losses after a motorcycle collision with a drunken illegal alien changed her life forever.

Austin resident Estefania Soto and her boyfriend Raul Diaz were on a motorcycle ride last month when an oncoming vehicle unexpectedly swerved into their lane.

“We were going as slow as he could because I told him I was nervous and he told me he would never do anything that would hurt me or us, and I knew he wouldn’t,” Soto told KXAN over the weekend.

“I was ejected from the motorcycle, and all I remember is, I was screaming his name, like I was so worried about how he was doing, I couldn’t feel any pain or anything, I was just able to hold myself up on the grass,” Soto said.

Soto was aided by good Samaritans and taken to the hospital where her daughter was delivered prematurely via c-section, but the baby later died.

Since the accident, Soto has had 15 surgeries and underwent a leg amputation.

The driver of the truck, 38-year-old Cesar Corona-Quiterio, fled the scene, but was later arrested on charges of intoxication manslaughter and intoxication assault.

He’s currently being held at the Travis County jail on a $2 million bond and an ICE immigration detainer.

Soto says she’s still torn by her losses, but is trying to be brave for her 5-year-old son Mason.

“To lose everything so fast it’s hard, I lost him and I lost my baby, and sometimes I feel like I’m never gonna be the same and I’m never going to get over this. But I have to be strong for my son,” she said.

Travis County was at the center of controversy earlier this year over a policy set in place by Sheriff Sally Hernandez which allowed her department to refuse to comply with federal immigration detainer requests.

Soto launched a GoFundMe asking for donations as she’s currently unable to work or provide for her son.