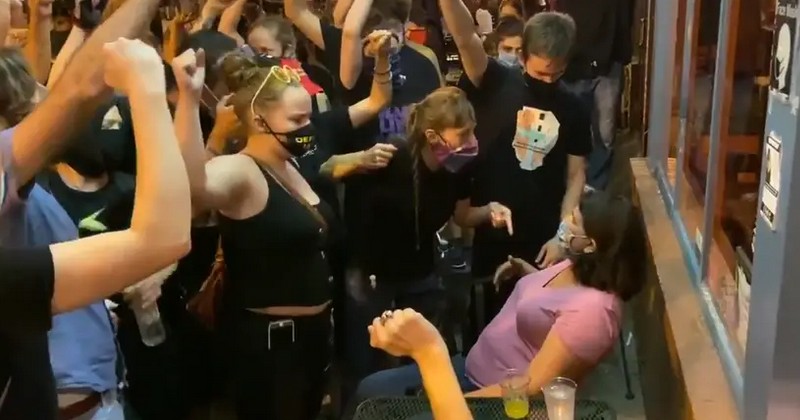 The woman who was encircled and screamed at by an angry Black Lives Matter mob outside a restaurant in DC for refusing to raise her fist has slammed the group’s “bullying” tactics in a Washington Post op-ed.

49-year-old urban planner Lauren Victor was confronted in a now infamous video by the BLM mob outside the Mexican restaurant Los Cuates.

After yelling about “white privilege,” the mob swarmed around Victor because she refused to be intimidated into raising her fist like other diners.

Several of them then proceeded to screech in her face while the rest of the group chanted, “White silence is violence!”

In the op-ed, Victor says she had no idea what the group was protesting about when they first approached her because she couldn’t see any signs.

“I asked who they were and why they were marching. No one would answer me. Why march and hold back your message?” she wrote.

“If you want my support, ask it of me freely. That’s what we do in a democracy,” she added, noting that she actually supported BLM and had attended BLM marches after the event.

Victor said she felt “fear” during the confrontation but didn’t appreciate the “bullying” tactics the mob were using.

Many observers reacted to the original video by suggesting the optics for BLM looked terrible and that the footage would encourage more people to vote for Trump.

However, such tactics, which mirror “struggle sessions” in Maoist China when dissidents would be similarly intimidated and tormented by violent Red Guard mobs, have been a common staple for Black Lives Matter demonstrators for years.