A woman who died days after surviving the ill-fated October 1 country music festival in Las Vegas wanted to organize a survivor’s group in order to flesh out the strange event, Facebook conversations reveal.

Kymberley Suchomel, 28, died suddenly on October 9 at her Apple Valley, California, residence five days after posting her version of events to Facebook.

In the days following the massacre, friends reached out to Suchomel over a October 4 post in which she described someone setting off “fire crackers” near the venue, and detailed being chased by numerous people, concluding at one point “There was more than one gun firing. 100% more than one.”

One longtime friend of Suchomel’s, who asked to remain anonymous, provided Infowars with screenshots of a conversation he’d had with her, in which she indicated planning to “organize a group of survivors” in order “to piece things together.” 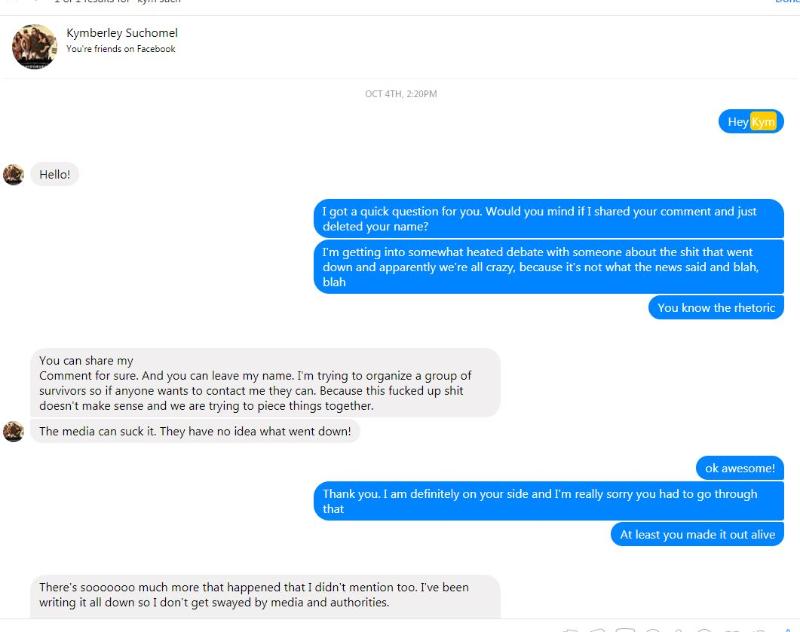 “You can share my comment for sure. And you can leave my name,” Suchomel says in a Facebook message to her friend. “I’m trying to organize a group of survivors so if anyone wants to contact me they can. Because this fucked up shit doesn’t make sense and we are trying to piece things together.”

“The media can suck it. They have no idea what went down!” she added.

Suchomel goes on to tell her friend, who told Infowars he’d known her for years, that she was compiling a “second by second story” detailing her experience, and pinpoints on an image where she’d been seated with her friends. 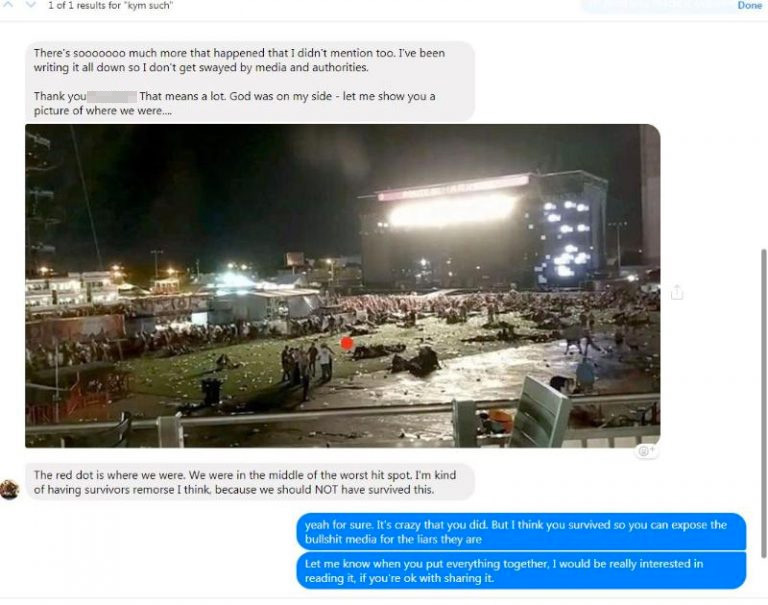 Important to note is that much of Suchomel’s lengthy account – now deleted from Facebook, but available here – appears to contradict the lone wolf shooter narrative provided to the public from law enforcement.

Another friend of Suchomel who organized a fundraiser to help pay for funeral expenses says her family made the decision to deactivate Kymberley’s Facebook account due to “an overwhelming amount of messages” from conspiracy theorists claiming her friend was “murdered.”

“They believe she passed away from a grand mahl seizure but the autopsy report has not been finalized,” Suchomel’s friend wrote on Facebook Sunday.

In comments to the Victorville Daily Press, Suchomel’s grandmother, Julie Norton, told a reporter she believed “Suchomel may have died in her sleep after her husband, Mike, left for work at 4:30 a.m.”

“Kymberley had epilepsy and she’s always been prone to seizures — she told her friend that she recently had three focal seizures,” Norton told reporter Rene Ray De La Cruz, who personally knew Suchomel. “I believe the stress from the shooting took her life.”

Before she met her untimely demise, Kymberley had told De La Cruz she was consumed with fear by the gruesome events she’d witnessed.

“My heart starts racing when I hear loud noises,” Kymberley stated. “I’m afraid because my heart keeping pounding and it won’t stop.”

Kymberley was also a charity organizer in California and had also created the High Desert Phoenix Foundation, which helps citizens of the region pay for costs associated with tragedies.

Kymberley is survived by her daughter Scarlett, 3, and her husband Michael. A YouCaring fundraiser dedicated to her can be found here.