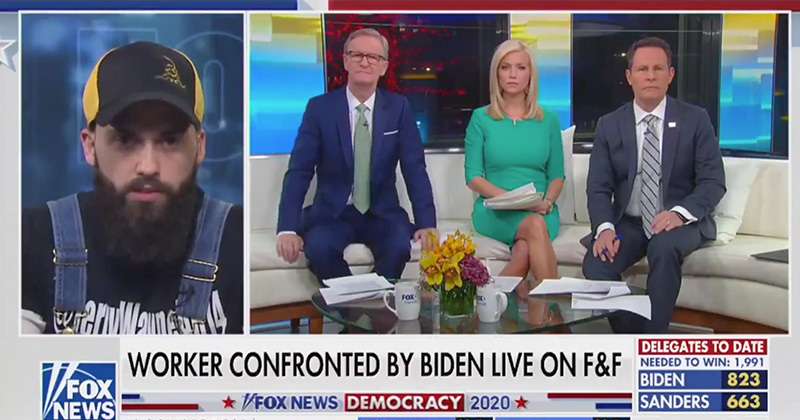 A Michigan autoworker named Jerry Wayne, who was verbally attacked and physically threatened by Joe Biden, discussed the encounter on Fox and Friends Wednesday morning.

The hostile Joe Biden clip went viral on Tuesday after the leading Democrat presidential candidate said Wayne was “full of shit” for claiming he wants to take away guns.

Biden went on to tell Wayne he doesn’t “need an AR-14,” which isn’t even a real gun, and threatened to “go outside” for a fight while poking his finger in the man’s face.

When asked if he was surprised by Biden’s reaction, Wayne said he didn’t mind the cussing, but admitted the Democrat frontrunner “could have curbed what he said a little.”

“I thought I was pretty articulate and respectful. I didn’t try to raise any feathers,” Jerry Wayne told Fox News’ Fox and Friends. “He kind of just went off the deep end.”

Next, Wayne was asked how it feels to be on the front page of newspapers and in the center of the political spotlight.

“It is an absolute privilege and an honor to be the voice of America when it comes to the firearms,” he replied. “This is a right that we need to protect with our heart and soul.”

Listen to @jerrywaynear14, the Worker & Patriot that Joe Biden shouted at for standing up for the Second Amendment

“It is an absolute privilege and an honor to be the voice of America when it come to the firearms. This is a right that we need to protect with our heart and soul.” pic.twitter.com/8r6mhOkIgn

Wayne’s message to the rest of the country is that “love goes a long way. If you’re actually able to listen to each other… left, right or center.”

“Actually take the time to listen to one another,” he continued. “Because a split America is not a good America.”

“Most people who lived in the 80s, 90s and even before then, they know just in that short time away America was much better,” Wayne noted. “Trump is doing a good job of building that back up, but when it comes down to it there is something that is splitting us apart and it’s not okay. Black, white, Asian, we are all American and we need to stand united as citizens.”

Before the left starts to claim Wayne is a Trump supporter trying to derail Biden’s campaign, it’s worth noting he didn’t vote for Trump in 2016 and is choosing to keep his preferred 2020 candidate private.